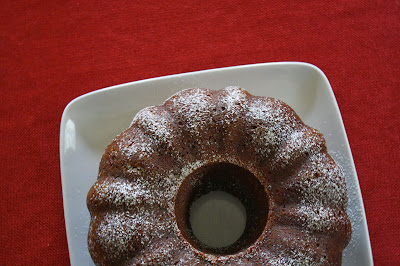 I realize that it’s clichéd, but in the fall, I like eating pumpkin and apples. I feel like it’s almost more of an obligation for me in South Texas, because otherwise it just doesn’t feel like fall, what with the weather still in the 50s and 60s on most days. It’s entirely psychological, of course, and I really can make the same recipes year-round, since I use canned pumpkin purée. (I have made my own purée once, but decided that it was a lot of work, and the stuff from a can is more uniform and doesn’t have any added ingredients anyway.) This year, I started by making this pumpkin Bundt cake, adapting it to use less oil. It was good and very fall-like! The Engineer would have served it with a dollop of whipped cream (or lactose-free equivalent), which I must admit would be a nice addition. Now for some reason, every last one of the pictures I took seems out of focus now that I look at them on my computer, except the one that is not centered. I’ve decided to go with it and call it artistic, because it’s just one of those days; two more pictures are at the bottom of the post.

Transfer to a greased 10-inch fluted tube pan. Bake 60-65 minutes or until a toothpick inserted near the center comes out clean. Cool 10 minutes before inverting onto a wire rack. Remove pan and cool completely. Dust with confectioners’ sugar. 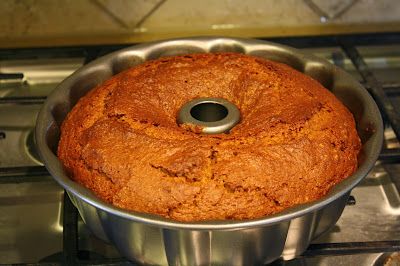 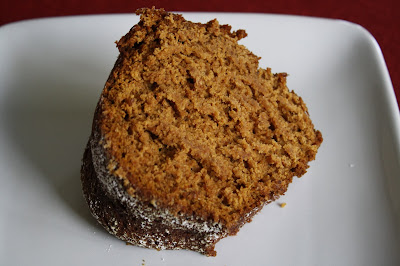