We have a few herbs growing in our garden still. The oregano that I uprooted and potted last spring is starting to grow back, and the thyme is doing quite well. We didn’t plant any basil this year; the mint could be doing better, because the drip irrigation tube had fallen out unbeknownst to me, but I’m not worried about mint dying. It’s the rosemary, though, that’s reigning supreme these days. It’s been mostly unattended over the summer, and with the rain we’ve had this year, it went from a few branches to this respectable bush: 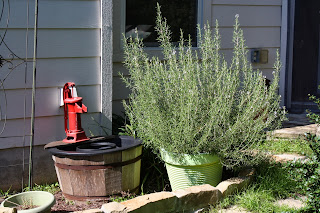 So I made a few recipes that called for rosemary (well, those that had the word “rosemary” in their title and so showed up when I searched my bookmarks). That’s how I remembered about this pasta from Smitten Kitchen. It took me about an hour to make, so I’m glad I made it when the Engineer could spend more time with the Little Prince – otherwise, make sure your kids can play independently for a while. To tell you the truth, I almost thought this would be a failure, because I puréed the beans and veggies twice instead of once, to thicken them, and the result was still like soup! I ended up mixing the veggies with the pasta, draining the whole thing (!), and then adding the pasta water to create a better sauce. It turned out to be really good, though! The Engineer even said that the vegetables were “honest” in this dish and he liked them; I thought that they played a good supporting role to an ensemble cast. I’m therefore writing the recipe below with less water, to avoid having the dreaded soup consistency, because that’s how I’ll make it next time. I used a sweet onion and a little less garlic than called for, because of the breastfeeding, though I have to admit I didn’t see much of a difference with the Little Prince, even with the legumes in here. This makes about 6 servings. 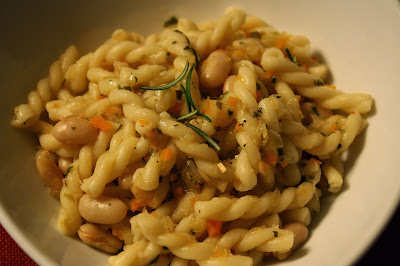 Pulse onion, carrot, celery, whole garlic cloves, parsley, and red pepper flakes (to taste) in a food processor until finely chopped. Heat ¼ cup oil in a large, heavy pot over medium heat and add vegetable mixture to pot. (Quickly rinse, but no need to fully wash, food processor as you’ll use it again shortly.) Season generously with salt. Cook, stirring from time to time, until vegetables take on a bit of color, about 10 minutes. Add tomato paste and cook it into the vegetables for another minute. Add 1 cup water (or bean cooking liquid, if you went that route) and use it to scrape up any bits stuck to the pot. Let simmer until liquid has almost disappeared, about 5 to 8 minutes. (The original recipe had you add 2 additional cups of water or bean cooking liquid here and had you simmer the mixture another 15 minutes to let the flavors meld. I recommend skipping that step and only adding more liquid if things look like they need it. I’ll try it with only the original 1 cup of water next time, plus the pasta water in the next step.)

Meanwhile, cook pasta until al dente, or still a little firm inside (it needs to still be a little undercooked so that it can absorb some starchy water in the next step, which helps make the sauce). Reserve 1 ½ cups cooking water from your drained pasta.

Transfer one cup of the bean mixture to your rinsed food processor and purée it until smooth, then stir it back into the sauce to thicken it. Add drained pasta and ½ cup cooking liquid to bean sauce and cook the mixture together, adding more pasta cooking liquid as needed, until the sauce coats the pasta, about 1 to 2 more minutes.

To serve: Heat remaining ¼ cup olive oil in a tiny saucepan over medium-low heat with garlic and rosemary, until sizzling stops. Divide pasta between serving bowls and drizzle garlic-rosemary oil over each. Finish this with a few flakes of sea salt.
Posted by Amélie at 4:32 PM