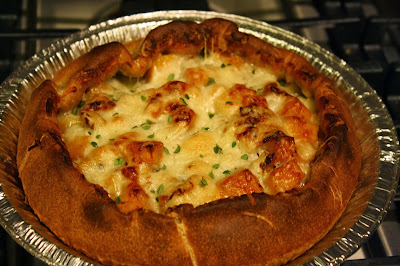 This Whole Foods recipe is one I’ve made for the freezer. I used half of a big sweet onion and 1 clove of garlic, but I’d have followed the recipe if I weren’t breastfeeding. I’d also cook the squash longer, because it wasn’t quite tender yet in the finished tart. That being said, it was delicious, and easy to boot! I particularly liked the dough, which was almost bread-like. I had placed the dough in a 9-inch pie tin, since I wasn’t planning on using a baking stone, but I see on the picture on the website that they made it into more of a rectangular shape… The way I made it, we got 4 servings out of it, with a side of spinach and carrots with sesame dressing (though I would definitely halve the dressing in that one next time).

On a lightly floured surface, with a lightly floured rolling pin, roll dough out to a circle about 14 inches in diameter. (If the dough pulls back strongly, stop rolling, cover the dough with a kitchen towel and let rest 10 minutes before continuing.) Transfer dough to a round pizza pan, baking stone or greased baking sheet (I used a pie plate, since I was freezing the tart). Reshape the dough as needed, but you can leave any edges hanging over the sides of the pan (they will be folded later). Cover with a towel and refrigerate.

Preheat oven to 475 °F and place a rack in the middle of the oven (I’d actually recommend putting the rack in the second-lowest position).

Cook bacon in a large skillet over medium heat until crisped, 8 to 10 minutes. Transfer bacon to a plate covered with a paper towel to drain; chop or crumble when it is cool enough to handle. Pour all but 1 Tbsp. of grease left in the skillet. Return skillet to medium heat; add onion, garlic, and salt (and pepper, to taste). Cook, stirring occasionally, until onion is golden and tender, about 15 minutes. Add squash and cook, tossing gently once or twice, until excess moisture evaporates, 2 to 3 minutes. (I recommend cooking it until it is almost tender – not all the way, since it will cook more in the oven, but maybe al dente, if that term can be applied to a squash.)

Scrape onion mixture into middle of dough and spread evenly, leaving a 1-inch border around edges. Sprinkle the top with bacon, then cheese. Brush edge of dough with half the oil and fold over to make a ½-inch rim. Brush rim with remaining oil. Bake until tart is deeply browned and dough is cooked through, 20 to 25 minutes. Sprinkle with thyme and cool 10 minutes, then transfer to a cutting board and cut into wedges or squares for serving. 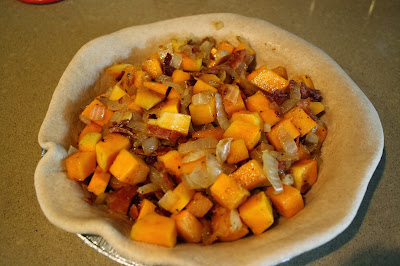 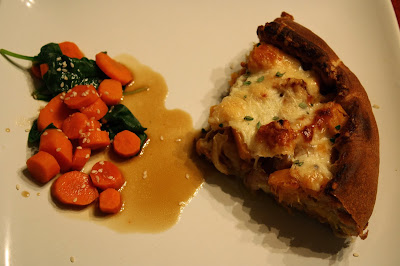