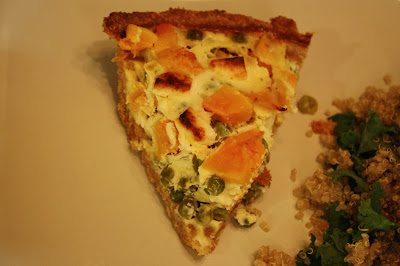 I made this quiche for the freezer early last summer. It contains feta, so it isn’t lactose-free; I haven’t found a good substitute for that particular cheese. I really liked how thick the filling was, since it uses Greek yogurt along with the usual eggs and milk. You might want to use fewer peas to get a consistency closer to that of a typical quiche. For the dough, I used a half-recipe of my usual pâte brisée, since I was making only one quiche, and I made a half-recipe of the filling below to fit a regular 9-inch tin pie plate. However, given that I ended up using half a butternut squash and half a package of feta, I really think it makes more sense to make two of these quiches at a time and freeze whatever you’re not eating right then.

Preheat oven to 425 °F. Line the quiche crust(s) with a piece of parchment, and weigh the tart crust(s) down with pie weights or uncooked beans, and bake for 15 to 17 minutes. Remove the beans and parchment paper, and return to the oven. Continue baking for 5 to 7 min, until the bottom of the crust(s) is no longer glossy. Remove from oven and let cool. (In my case, I found that baking the crust a total of 15 minutes did the trick.)

Turn down the oven to 375 °F. Toss the cubed butternut squash with the olive oil. Spread the squash on a baking sheet and bake for about 15 minutes, until cooked but not completely very soft. Remove from oven.

In a bowl, whisk to combine the minced garlic, eggs, yogurt, milk, salt, pepper, and nutmeg. Pour the egg mixture into the crust(s). Bake for about 55 minutes, until the center is just set. Remove from the oven and let cool on a wire rack for at least 45 minutes before serving. (I served this with a salad of quinoa, kale and crack sauce, but just the greens would have been enough. Especially when I realized how popular quinoa and kale have been lately, I felt like I had followed a trend, but I really do like them! My mom was making quinoa back in 2000, if that gives me any cred.) 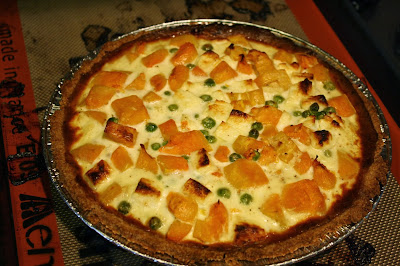 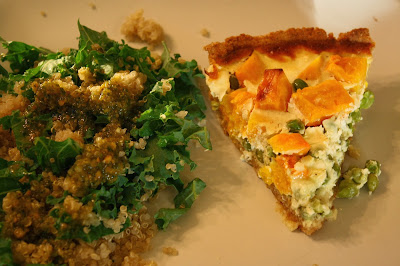