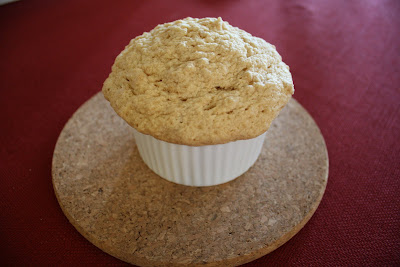 This is a cake that I made on a whim (and renamed, also on a whim). I had a jar of peanut butter to use up before the expiry date (it was from our emergency kit), and there were two egg whites in the fridge left over from one of the Engineer’s cookie recipes. I made it using dairy milk instead of almond milk, and since that’s the only change I made, I can only assume that’s why my cake is totally different from the one promised on Foodie Fiasco (weird name for a food blog, too). It was supposed to be a flat, fudgy cake, but mine was super tall and dry, albeit spongy. This is when it pays off to have a decently clean microwave, for impromptu pictures! I didn’t unmold it, because the rim of the muffin top was stuck to the ramekin, but the stump of it was, in fact, free from the ramekin. It was good, but I’m not sure I’d make it again – though perhaps I’d try it with non-dairy milk, just to see. Note that this cake can be made vegan, and it is naturally gluten-free.

In a small microwaveable bowl, add the peanut butter and almond milk. Nuke for 45 seconds to a minutes, stir, and let sit for a few minutes. Add in the rest of the ingredients and stir until everything is evenly incorporated. Spoon the batter into a greased mug or ramekin and smooth out the top. Microwave for about 2 minutes, keeping a close eye on it to cook it shorter or longer as needed because microwave cooking times vary so greatly. Let cool for a few minutes before unmolding. You can also make a glaze for it by warming 1 tsp. almond milk and 1 tsp. peanut butter for 30 seconds, mixing it well and pouring it over the cake. Given how tall my cake was, I decided to leave it alone. 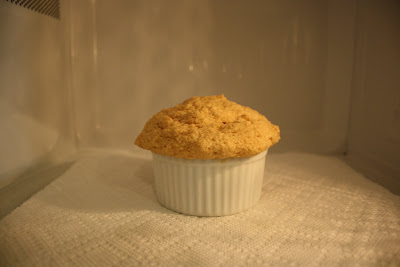 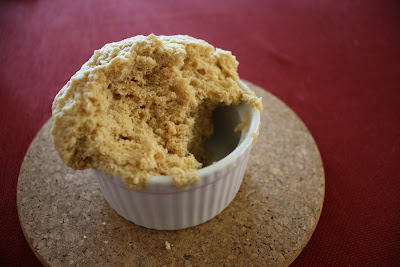