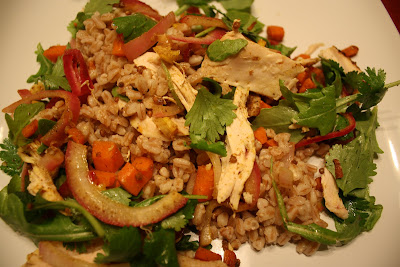 I like (mild) curry, but I don’t like when it overpowers a dish. Not too long ago, I made aloo matar (potato and pea curry), but the flavors were too much and I got sick of it quickly. More recently, I tried an interesting two-in-one dish: curried quinoa pilaf with roasted squash and yogurt-marinated chicken; the first night, it was a chicken breast on the side of a quinoa-stuffed acorn squash; the second night, it was a quinoa salad with cubed squash and chicken that went on to feed us an extra day beyond that. Unfortunately, I didn’t find it good enough to make it again. But then, I made this curried grain salad from Bon Appétit (the original recipe called for spelt, but I used farro). This is a dish where the curry plays a supporting role, and it’s delicious. The only thing I would change would be to use lemon juice instead of lemon rind next time, as some forkfuls had no lemon taste at all and others tasted powerfully like lemon. Note that you can roast your own chicken if you want, of course, or omit it for a vegan or vegetarian meal.

Place spelt and 1 tsp. kosher salt in a medium pot. Add water to cover by 1 ½ inches. Bring to a boil; reduce heat to medium-low and simmer, uncovered, until spelt is tender and water is mostly absorbed, about 1 hour (or 12–15 minutes if using semi-pearled farro). Drain; place in a large bowl.

Meanwhile, heat vegetable oil in a medium saucepan over medium heat. Add curry, mustard seeds, cardamom, and coriander; cook, stirring often, until spices are fragrant and mustard seeds begin to pop, 2–3 minutes. Stir in carrots and season with salt and pepper. Cook, stirring often, until carrots are crisp-tender, 5–6 minutes (I cooked mine longer).

Add vinegar and stir until evaporated, 1–2 minutes. Stir in onion and lemon. Remove pan from heat and stir until onion is wilted, 1–2 minutes (I put it back on the heat to wilt the onion to my taste). Add vegetable mixture to bowl with spelt. Season to taste with salt and pepper. Let cool. 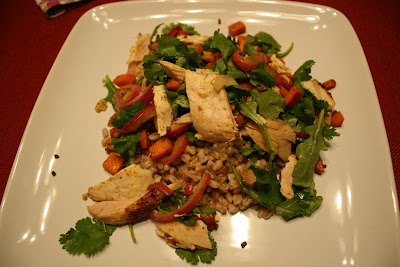