Featherweight wrap, and a tip or two

My latest knitting project was this Featherweight Wrap. I once again used 4 skeins of yarn from See Jayne Knit Yarns, this time a 100% superwash merino that is 105 grams for 500 yards, in the gorgeous color called Cranberry. On paper, it’s lighter than what the pattern called for, but I still ended up with something heavier than I was expecting. I think the yarn also stretched a bit after being wet, and the edges of the collar band are now pointy. As I did last time, I made the sleeves a little bit shorter than what the pattern called for, so they’d hit at the elbows. The detail I like, which you can see further down, is that underneath each armpit and down the back are two decorative rows of little holes, created with a yarn over. 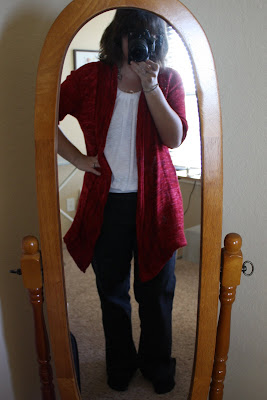 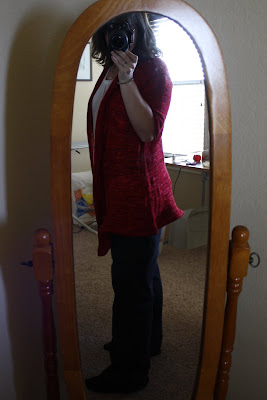 I ran into a bit of a problem: while I know that hand-dyed yarns should be knit alternating skeins (the shop owner even suggested I do so), I’ve never had a problem before, so I just used one skein after another. But it turns out I have a visible color demarcation in the lower part of my cardigan… It’s my own fault, but I’ll still wear the shirt instead of frogging it and starting over. I’ve got too many things to knit to just make the same shirt over again right now. From now on, though, I’ll be more thorough.

The edge of this shirt has 3 rows of purl stitches and 4 rows of knit stitches before being bound off. While it looks beautiful, it does have the unfortunate tendency of curling up, even after being blocked. Luckily, though, I found this trick via Pinterest. Basically, after finishing the edge called for in the pattern, instead of binding off, you purl one row, then work an inch or two in rib stitch. You then only need to fold the ribbing under the edge and tack it into place with matching yarn, and the extra structure there will keep the edge straight! It’s brilliant, really. So I did that on the bottom edge, but left the collar and sleeves as they were, since I was afraid I wouldn’t have enough yarn for all of that. This is a tip I’ll definitely keep as well! 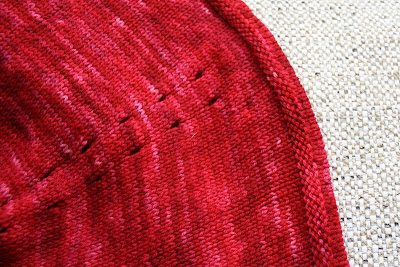 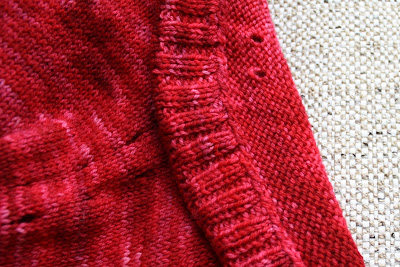 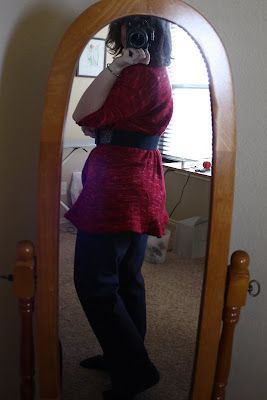 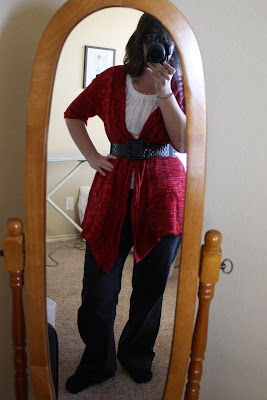