Sewing with knits - An adventure

I know I’ve said that sewing with knits is hard and that I didn’t want to open that can of worms any time soon. But then I read this fantastic tutorial on Prudent Baby, which explained how to deal with knits. Yes, they stretch, but you can use a walking foot to help minimize the problem! This made a world of difference to me, and also helps in quilting projects, as it moves the fabric along from the top (while the machine’s feeder dogs move it along from the bottom). A serger would help for hems, as would twin needles, but as far as I know, I can’t do that on my machine (and I don’t have a serger). I also don’t have the option to do a stretch stitch (nor do I have a good basting stitch, really, but that’s another issue entirely), so I used a zigzag stitch. I did, however, buy ballpoint needles, which help because they can sew knits without tearing through the fibers.

I installed the walking foot and ballpoint needle and decided to practise a bit by upcycling some old knit t-shirts into trivets. I made two 9-inch squares ones, for each of which I used a piece of 9-inch square Insul-Bright (which acts as heat-proof padding), a 10-inch square of scrap fabric (I used a woven one), three 4”x10” strips of knit t-shirts in coordinating colors, and bias tape (made from the woven scrap fabric). All of this assumes ½” seams. Of course, keep in mind that if you want to actually use your trivets, your fabric has to be heat-resistant (everything I used was 100% cotton, so I’m fine, though linen would work too). I started by sewing the strips of knit fabric together on the long side, then I put them right-side-together with the woven backing and sewed along three sides. I flipped the pouch so that the right side was out, inserted the Insul-Bright, folded the edges in and sewed the last seam. Then I added the bias tape on the perimeter, though it’s optional. You could also use it to make a loop on one corner of the trivet. A walking foot was really a godsend for this project! 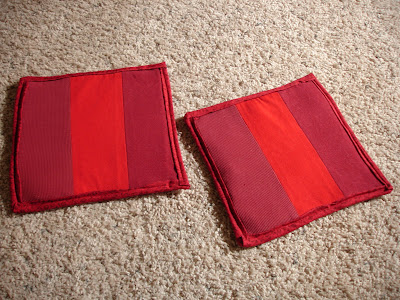 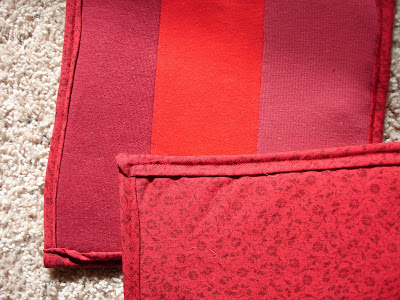 That had gone well, so I took the plunge. I bought some knit fabric and polyester thread (which has more stretch than cotton thread and therefore more appropriate than the latter for sewing with knits) and practised. It took me a while to adjust the tension properly, but I finally got it right and was able to sew seams that lay flat. So I used this free pattern to make a skirt. I started by adding an interlining of the same fabric, since I had read that it was recommended for skirts. I ended up with fabric that was too heavy: when the skirt was upright (as opposed to laying flat on the table), gravity pulled the 8 panels of fabric down and made them droop at the seams. I had enough fabric to make a 6-panel skirt without an interlining, so I did that, all the while thinking that I would have to make an additional lining or wear the skirt with a half-slip, but the same thing happened again! I think perhaps the knit fabric really wasn’t meant for this pattern (regardless of the fiber content). 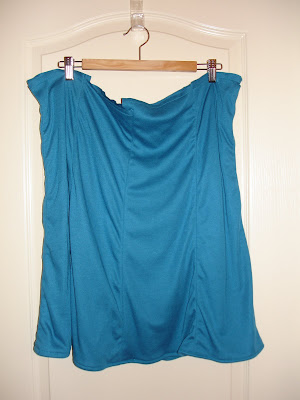 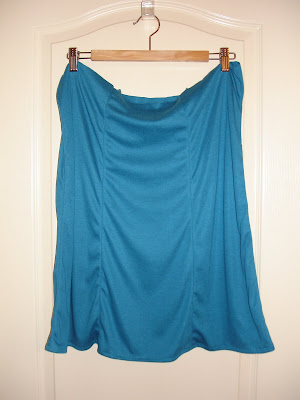 I didn’t want to throw all of it away, so I recycled the interlined skirt into two pleated scarves seen on Make It And Love It. It was an easy project, was good to practise sewing with knit fabric, and gave me something I can use out of this whole thing; the scarves were still cheaper than the store-bought equivalent. I since bought fabric that was better suited for the skirt, using the recommendations directly on the pattern’s website, so I’ll report back on that! I haven’t figured out what to do with the fabric from the 6-panel skirt, so it’s going in my stash for now. 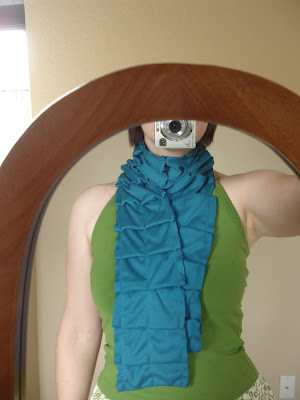 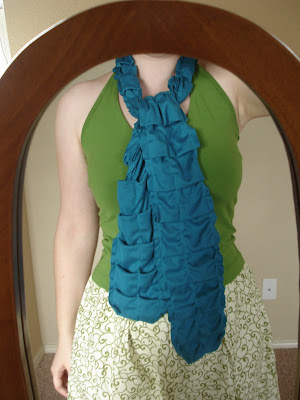