I probably should have tried this bread before I got over my issues with kneading! I finally got around to making it based on the version of the recipe published on The Kitchn. Be warned that it’s not fast to make, as it requires time to rise (overnight in the original recipe, 6 to 8 hours in this version). It didn’t rise as much as I thought it would, and next time, I would use bread flour instead of white whole wheat flour. That being said, it was good bread!

I served it with a squash-corn-lemongrass soup topped with spiced pumpkin seeds, which I liked, but the Engineer said there was something about the mix of flavours that was offensive to him. He likes them all individually, though. I personally thought it was a bit bland, which I fixed with my “chickn” broth powder made from nutritional yeast (of course, I’d write “broth” instead of “water” in that recipe, myself). Given the Engineer’s reaction to the soup, I won’t be making it again, but the spiced pumpkin seeds are keepers, as is the no-knead bread, obviously!

I recommend reading 20 tips, tricks and ideas for no-knead bread, which rounds up different versions of the recipe, as well as flavour variations and recommendations for making it into a sandwich loaf or a baguette instead. Here’s the recipe!

After at least 6 hours have passed, the dough will have risen and will look rather bubbly and stretched out. Lightly oil the countertop and turn the dough out onto it, folding it over on itself at least once. Cover the dough with plastic wrap and let it sit for another hour.

About 20 minutes before the hour is up, turn on the oven to 450 °F. Place an oven-safe Dutch oven or pot in the oven. When the rise time is up, the dough will have risen and nearly doubled in size. Quickly shape the dough into a round ball and drop it into the pot. Even if you can't get it into a good ball, that's OK. Just try to roughly shape it. I recommend using parchment paper in the bottom of the Dutch oven to facilitate cleaning up; it’s even easier to transfer the dough into the hot pot directly on the paper. (If you’re afraid of burning yourself, try placing the dough to rise in a cold oven which you later turn on for the baking, as suggested in this version.) Slash or cut the top of the dough with kitchen shears or a sharp knife. Place the lid on the pot and put it in the oven. Bake for 30 minutes.

Remove the lid from the pot and bake for an additional 15 to 20 minutes. You can be extra-sure that the bread is done when an instant-read thermometer inserted in the top or side reads 210 °F. Remove the bread from the oven. If you wish to keep it warm for serving, you can wrap it in a clean kitchen towel. Slice and serve! 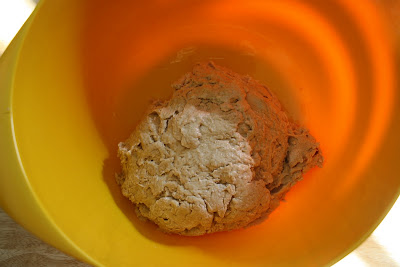 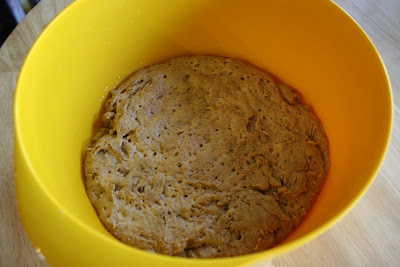 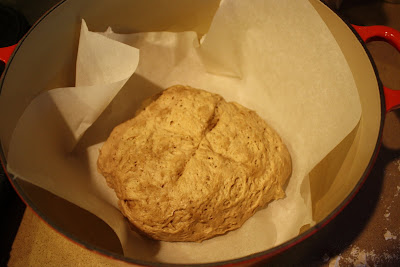 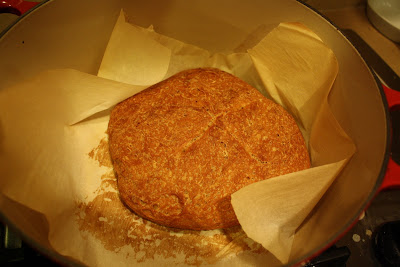 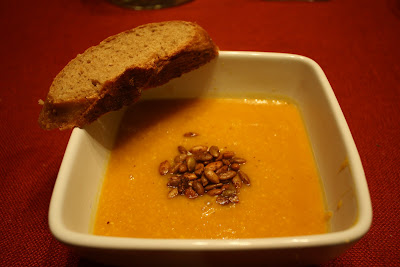