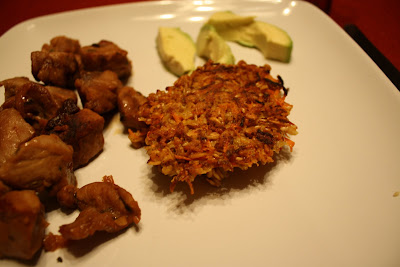 These were originally carrot and rolled barley galettes, found on Chocolate and Zucchini, but I couldn’t find rolled barley at my grocery store (all they have is medium barley, stashed in the soup aisle instead of with the other grains). I used rolled oats instead, and the result was quite good. You could use something other than carrots, too, like sweet potato or zucchini, but keep in mind that it doesn’t get cooked much in the galette, so you might have to cook it beforehand. I also messed with the proportions a bit, so I ended up using an egg to help the galettes hold their shape in the end; however, the four I had cooked without egg were still really good, and vegan to boot. The Engineer thought it was a riff on latkes, but I found them a bit heartier. With a salad, it would be a good lunch, but I used them here as a side to some marinated pork. This recipe makes about 8 galettes.

Combine all ingredients from carrots to nutritional yeast in a medium mixing bowl. Add water and stir well. Cover and let stand for at least 1 hour or until the next day (refrigerate if you let it stand for more than 1 hour). The mixture will gradually become more cohesive; the longer it rests, the easier it will be to shape.

Pour a bit of oil in a skillet and place over medium heat. Divide the mixture into 8 equal portions (of about 85 g/3 oz each). Wet your hands lightly, scoop out a portion and shape it into a patty between the palms of your hands. You can make the patties thicker or thinner depending on your preference. Repeat with as many portions as you want to cook. Transfer the patties to the hot skillet and cook for 3 minutes on each side, or until golden.

Serve immediately, with a sprig of cilantro and a dash of hot sauce. The raw mixture will keep for about 2 days in the fridge, tightly covered. (I made all the patties the first night and just reheated them later, though, and they were none the worse for wear.)