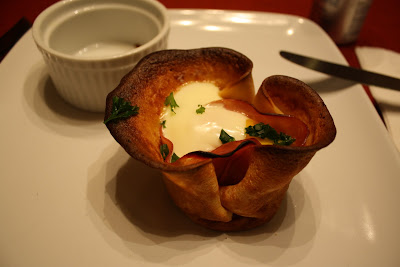 The Engineer loves dishes with baked eggs, so I knew this one would be a hit. However, as always, my crêpes turned out a little too thick and therefore didn’t spread enough. They're still good, just smaller and thicker than they were meant to be. The original recipe, however, called for cracking an egg in the middle of a 12-inch crêpe, folding the sides over in a square shape, then baking it. My crêpes were closer to 9 inches, though, so I knew the egg might run off, and the sides would never stay folded closed. I remedied the situation with ramekins, by putting a crêpe in each before filling it. It was a great solution, since there was no mess, and they unmolded very easily once they had been out of the oven for a bit.

I did have a little trouble with the baking time: I started by following the recipe and baked the cups at 350 °F for 12 minutes, but even the whites were still runny and totally liquid (the cups were shaped differently than the squares from the original recipe, though). I followed that with 10 minutes at 400 °F, at which point the crêpes started to burn, but the eggs were still jiggly, so I ended with 5 minutes at 350 °F. Next time, though, I would try 12 to 14 minutes at 400 °F. Keep that in mind if you make a cup version, but use the original recipe’s instructions for the square version.

The crêpe recipe itself is definitely a keeper, as they were delicious! I used canola oil instead of butter in the recipe, but the rest was unchanged. We had some of the baked ham and egg crêpes for dinner, and ate the rest of the crêpes with breakfast on following mornings. That being said, it would be a good dish for brunch, too, perhaps with bacon instead of ham (or turkey bacon, for the more health-conscious and those who aren’t crazy about ham). Keep in mind that the proportions below make a little over 4 servings (if you serve 2 crêpes per person); I made the full recipe of crêpes, but used only 4 to make my ramekins, so 4 slices of ham and 4 eggs (apart from those in the batter) were enough.

Combine flour, sugar, salt, milk, four eggs and the melted butter in a blender and blend on high for 30 seconds. (I did this by hand, though I’m sure a food processor would work, too.) Let rest for 15 minutes. (I poured the batter through a sieve at this point.)

Heat a 12-inch non-stick skillet over medium heat and lightly coat with butter. Add 1/3 cup batter and swirl to completely cover skillet. Cook until underside of crêpe is very lightly starting to brown, about 2 minutes.

Loosen edge of crêpe with spatula and then either using large spatula or your fingers, lift it up and flip it over. Cook another minutes and then slide out of skillet onto wax paper. Repeat until all crêpes are done. You should have about 9 12-inch crêpes when you are done.

Preheat oven to 350 °F. Place crêpes on a rimmed baking sheet (you can fit 3-4 per sheet). Place ham slice in center of crêpe and carefully crack egg onto ham. Fold edges of crêpe toward center, using the egg white as a kind of glue. Season with salt and pepper and bake until egg white is set, about 10-12 minutes. (If your crêpes are in ramekins, like mine, consider setting your oven to 400 °F and baking the crêpes about 12-14 minutes.) Sprinkle with chopped parsley and serve at once. 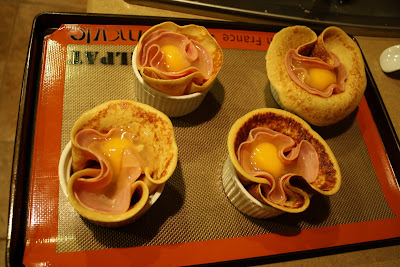 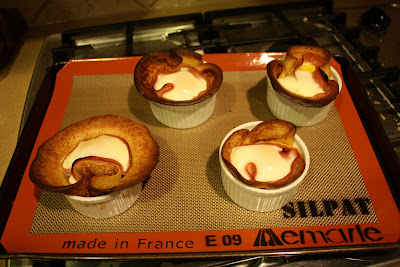 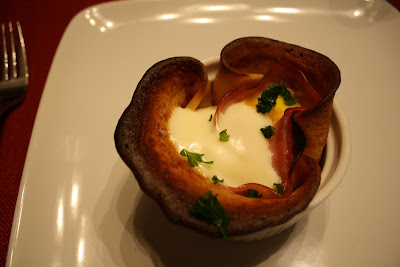 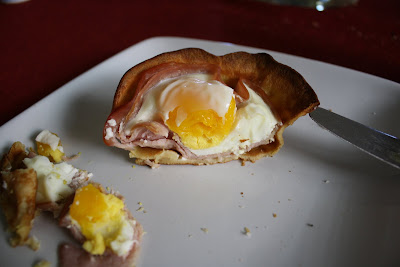