I recently tried two new recipes for chocolate cupcakes; one had chocolate chips and cinnamon, while the other had an optional, though recommended, peanut butter frosting. You can omit it or replace it with soy butter if you have a nut allergy. I found out that when you are not in your own kitchen (or in my case, not in my usual kitchen with my usual appliances), vegan cupcakes are easier to make than others. You see, most call for oil instead of margarine or butter, so there is no step requiring an electric mixer to cream the butter and sugar. You can make the whole thing with a whisk and wooden spoon, in two bowls at most. That was the case with the chocolate orange ginger cupcakes I made last summer, before I was settled down. But really, they’re just very good cupcakes that happen to be vegan.

The first recipe is from Little House of Veggies. It calls for cinnamon, but I think it would also be great with a mix of spices to get a chai flavour, or even plain. I ended up with 9 cupcakes instead of 8, but in any case this makes less than a dozen. They are originally called chocolate fudge muffins, and they were great as a breakfast, snack or dessert. But they ride the line between muffins and cupcakes, and with a little frosting, they would definitely be the latter. Since I’m not quite as comfortable in my summer kitchen as I am at home in San Antonio, I tend to skip important steps in the recipe, or be a klutz with certain things. I burned my hand on a baking sheet recently (it’s a small burn that is healing just fine), and I didn’t mention it at the time, but when I made my raspberry yogurt cake, I forgot the eggs. (I realized it as I was trying to transfer batter into the pan; I knew there was something wrong with it, because it was way thicker than cake batter. That’s when I realized that I had forgotten the eggs, so I put the batter back in the bowl, beat the eggs separately, then mixed the whole thing again and put it in the pan. That’s why mise en place is so important!) This time, I forgot all about the chocolate chips until the batter was nestled in the tins. I ended up putting the chips on top of each muffin, and I loved the result.

Preheat oven to 350 °F. Spray grease 8 or 9 muffin cups on the muffin tin. Mix the applesauce, canola oil and vanilla extract. In a separate bowl, mix the dry ingredients. Combine the wet ingredients with the dry. (This batter is deceiving! It will seem too thick and you may think it doesn't have enough moisture in it, but that is how it is supposed to be. Just make sure everything is incorporated and mixed well.)

Fill the 8 or 9 muffin cups, and bake for 20-25 minutes. Be careful not to overcook these! The muffins are done when they are barely firm to the touch on the top. Let them cool for 10 or so minutes before eating. They are good both at room temperature and warmed up 10-15 seconds in the microwave. 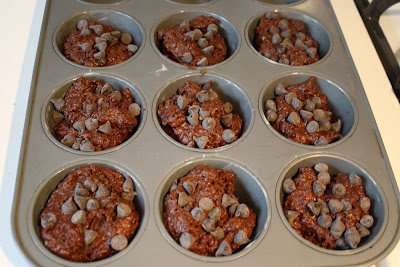 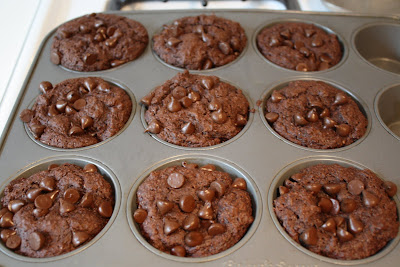 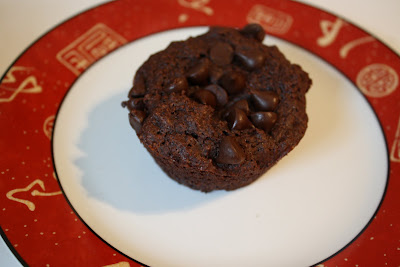 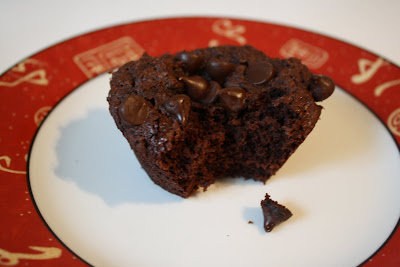 This second recipe, while not as healthful as the first, did have vegan peanut butter frosting that I really liked. The flavours complemented each other quite well, and the ratio of cake to frosting was perfect. The Engineer moaned his satisfaction and declared it the best frosting ever, as he reached for a glass of milk to help wash it down. (That being said, I only had enough frosting for 11 cupcakes, so 1 went commando.) And the cake was so moist! I ended up using dairy lactose-free milk, so they weren’t entirely vegan, but still extremely easy to make.

Preheat oven at 350 °F. Line 12 muffins tins with paper liners. Sift together dry ingredients and whisk to mix. Whisk together soy milk and vinegar; add sugar, oil and vanilla. Whisk until foamy. Add the dry ingredients to the soy mixture, mixing in batches. Pour into cupcake papers and bake for about 10-15 min.

For the frosting
½ cup peanut butter
2 cups powdered sugar
2 Tbsp soy milk (I used more, to get the desired consistency)

Beat together until smooth and creamy. Use immediately. 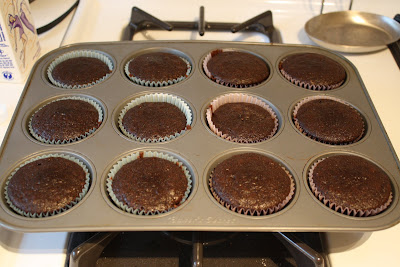 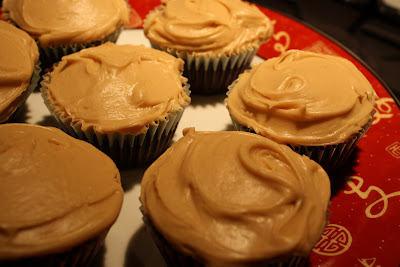 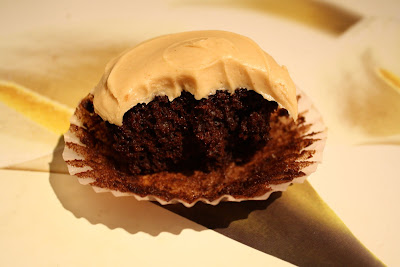