Tidbits from Montreal and Bon Appétit

In the December edition of Bon Appétit magazine (to which I now have a subscription), there was a feature on Montreal that included half-a-dozen nice restaurants. I’m curious to try Kitchenette in particular, since the chef-owner is Texan. It’s a nice read, whether or not you’re familiar with the city.

The Engineer and I got to spend the holidays in Montreal, and we had the traditional Meatfest: this year, the Legal Chef “killed” the turkey in an attempt to remove the neck and giblets while it was still frozen solid. He refused to serve it, so we ended up with roasted chicken that had been delivered, along with pizza (for those willing to have dairy). Jen had made stuffing; D. and N. made salad; I brought my cranberry sauce and, for dessert, chocolate chip cookies made from the pizookie recipe. We also had smoked meat along with homemade rye bread (by the Legal Chef) and homemade mustard (by Rob).

On New Year’s Eve, Jen and the Legal Chef have a tradition: they spend the day baking something wonderful, then bring it to a party we attend in the evening. This year, they made the famous spiced chocolate torte wrapped in chocolate ribbons, which Bon Appétit came up with over 20 years ago and published again in the December issue (it is their most requested recipe). Here are pictures of their masterpiece, which according to the magazine, is comprised of 14 servings, each packing a whopping 1236 calories! (I just noticed it also has 7 grams of fiber per serving; my father would be happy with that.) Let’s just say we each had slivers of cake, and there was plenty to go around. It was as good as it was beautiful, though! 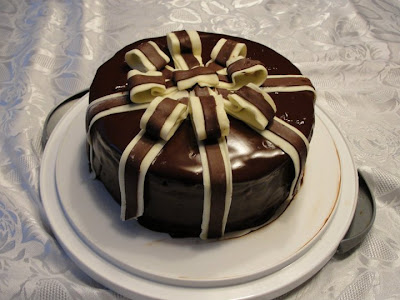 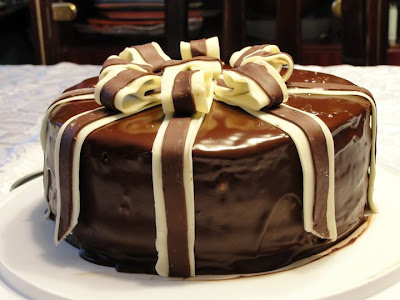 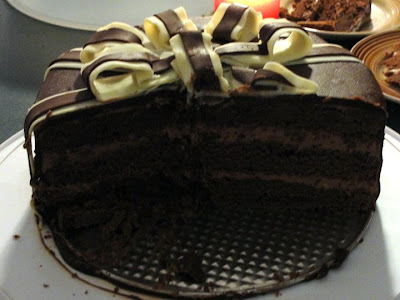 That looks so good! Mmm!