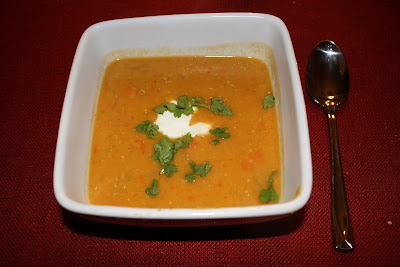 A long time ago (almost two years... yikes!), I bookmarked a red lentil soup recipe published on Tea & Cookies, because it looked like something I’d really like. I finally got around to trying it right before the holidays, after finding red lentils hiding in the bulk section of Whole Foods (and not in bags with the other lentils and beans next to the rice). I ended up adding more broth to the soup, and two carrots instead of one in order to empty the crisper drawer. I really loved it, but decided not to write about it then, partly because I took time off for the holidays and partly because I wanted to compare to another red lentil soup recipe I had bookmarked last fall. So a few weeks ago, I get around to trying that second one, published on Orangette, and do a double take when I look at the ingredients. It’s the same list as the first soup, with only a few quantities changed. It turns out that both recipes are actually based on one published by Melissa Clark in The New York Times. And you know what? It was so good the first time that I made it again.

In the end, I kept a version of it closer to Molly Wizenberg’s (Orangette), which has an extra carrot but also more broth than the original (though I stick to one onion, not two, and more other quantities remain as they are in the original recipe). This is all adjustable according to your taste, of course. I do recommend using 2 Tbsp of lemon juice, like on Tea and Cookies, which makes for a soup with a hint of lemon: enough to be a noticeable taste, but not so much that it’s lemon soup. I also use Korean pepper almost exclusively now whenever a recipe calls for cayenne pepper, chili pepper or anything along those lines. The garnishes I list here are optional, but I recommend the plain yogurt, as it complements the dish quite well. Note that I use the cilantro as a garnish rather than stirring it in the soup, as that’s what both bloggers appear to have done and I had their photos in mind rather than the textual recipe. I love this soup, as it is quick to make, healthy and savoury. This makes about 4 small main course servings, so consider doubling the recipe.

In a large pot, warm the oil over medium-high heat until hot and shimmering. Add the onion and garlic and cook until golden, about 4 minutes. Stir in the tomato paste, cumin, salt, pepper and Korean pepper, and cook for 2 minutes longer. Add the broth, the lentils and the carrots. Bring to a simmer, then partially cover the pot and reduce the heat to maintain a gentle simmer. Continue to cook until the lentils are soft, about 30 minutes. Taste, and add more salt if necessary. Using an immersion or regular blender, purée about half of the soup. It should still be somewhat chunky, not completely smooth. Reheat if necessary, then stir in the lemon juice. Top the soup with plain yogurt and cilantro, or top with cilantro and serve the soup drizzled with good olive oil and dusted very lightly with Korean pepper, if desired.

The following pictures were taken the first time I made the soup, but I now use more broth, so it isn’t as thick. 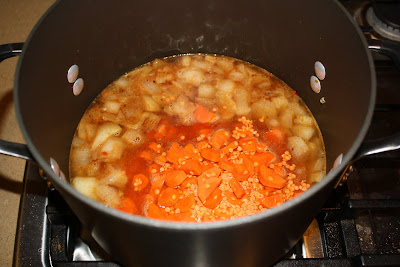 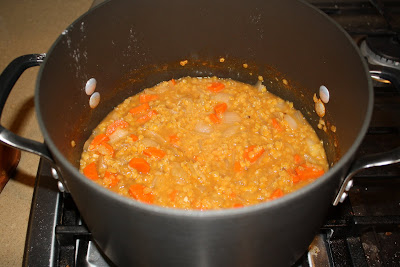 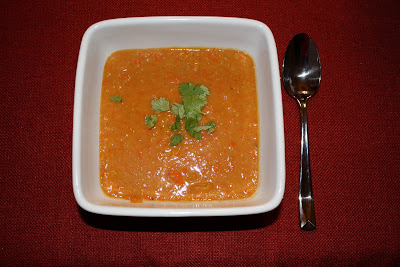 Wanted to make red lentil soup since Ellie asked about red lentils at the grocery store. I puréed the entire thing and Nathan liked it!