The Snap of Citrus in Desserts, with David Lebovitz 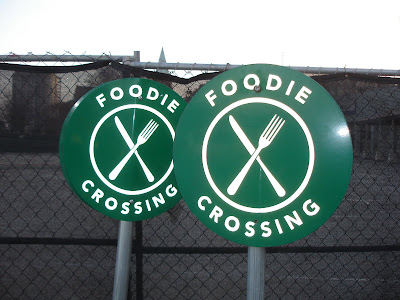 Last night was my cooking class at Central Market, during their citrus fest event. The class was called “The Snap of Citrus in Dessert” and was taught by none other than David Lebovitz (who I just found out like Schwartz’s in Montreal – look at the 5th comment in today’s post on his blog). 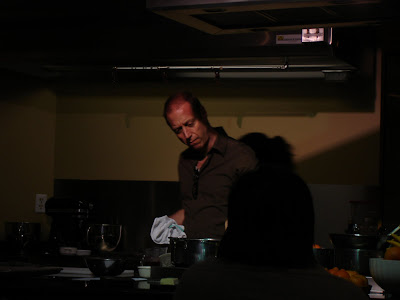 This cooking class was much more enjoyable than the last one I took. This is in part because of David Lebovitz himself, of course; I’m a fan of his, but even without that, he’s likeable, great in front of a class, and knows how to make things interesting by filling any lull with funny anecdotes from his personal life. He clearly enjoys what he’s doing, and you can tell by his face when he tastes something really good. He explains what he’s doing as he’s cooking and gives tips, but not to the point that he’s talking down to you, because he knows that the people there know how to cook too (even if they have less experience than him and no professional training). I also knew that this class was a demonstration only, but we did get the pleasure of eating a serving of each dish that was presented. There was lactose in just about everything, but it was all so delectable that the Lactaid was worth it.

The dishes he made were Meyer lemon-buttermilk ice cream sandwiches with nonfat gingersnaps, spiced hot chocolate cakes with caramelized white chocolate and dark chocolate shards (with some candied tangerine peel thrown on there for good measure, since the theme was citrus), tangerine floating islands with blood orange caramel, and goat cheese soufflés with mixed citrus compote in sparkling champagne and yuzu jelly with candied tangerine peel. And of course, I now have the recipes. We also got to see and smell various citrus fruits that are harder to come by: apart from the yuzu, for example, there was a variegated green-yellow lemon with pink flesh and a cara cara orange..

Of course, I got my copy of Ready for Dessert signed, and had a picture taken with David Lebovitz (I wasn’t going to pass up that opportunity). 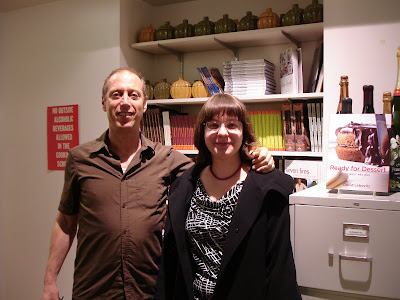 I followed up the class with a quick bout of grocery shopping. This was the perfect opportunity to get a few of the rarer citrus I needed for some of my recipes. I didn’t buy blood oranges (which, unlike the last ones I bought in Montreal, were really Dexter-red), but I did get Meyer lemons and, even though I hadn’t planned on it, a Buddha’s hand citron. I have a recipe that calls for it, and I didn’t know when I’d ever find it in stores again, so I pounced on it. I also got some maroon carrots for another recipe. And that’s why I didn’t get blood oranges, because I don’t want to waste any produce – but I hope to come back next week. Central Market is really great for elusive produce and spices like that. I also took some pictures of the hot pepper section, as per the special request I got from Rob. Enjoy! 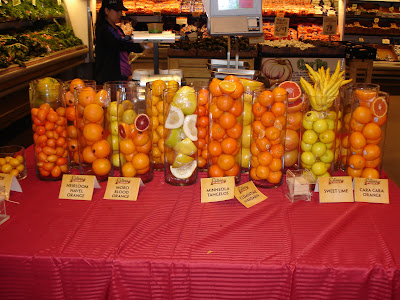 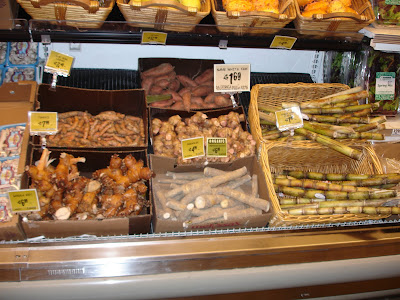 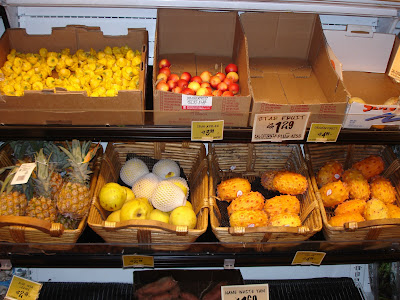 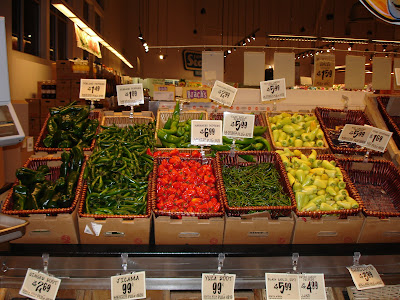 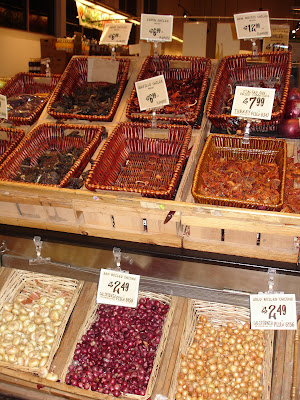 That sounds delicious. I certainly hope that you will make some (or all) of those recipes for Meat Fest next year.
The selection of chilis looks very good. The part that I like better is the availability of bulk dried chilis! In Montreal I've only found them bagged and of unclear age.

Here's a recommendation for your blog now that you've taken the pictures I asked for:
cookbook reviews
You've got that new Lebovitz book that I want to hear more about and I think the Engineer is nearly done his project of working through Baking Illustrated.

Unfortunately, I cannot make those recipe for Meatfest next year, as they are all dairy. I'll see if I can substitute ingredients, or perhaps work something out for Vermontfest.

When you come to see us in Texas, we'll definitely take you to Central Market; it's the greatest supermarket I've seen. (Whole Foods is also wonderful, but on a smaller scale than Central Market.)

As a matter of fact, I do plan on talking about cookbooks more often on my blog. Most of the recipes I want to try are bookmarked online or are pages torn out of magazines, while the cookbooks sit neatly on a shelf. As a result, my compulsion to clean up what is in the way often has me cooking outside the books, just so I can then tidily put the recipe in a binder on the shelf. But I did get some great cookbooks over the holidays (see first page of my Amazon Affiliate store in the right-hand column), and I want to use them! They're now sitting on the dining room table for me to use as I make up the weekly menus.

For the record, the Engineer is NOT almost dome with Baking Illustrated. He did take 4-5 months off while we moved, and he rarely does variations on a recipe, but there are way more recipes in there than we thought. He is currently about halfway through the book: once he finishes pastries, he still has cakes and cookies to go through! Luckily, he can now take baked goods to work and share them with his colleagues, so they're not sitting around the house calling to me.

No cakes yet? I'm having visions of credit card bills with special sections just for butter (or substitutes) when he really starts with that chapter!
Jen and I have the same problem with recipes. I keep getting awesome new cookbooks (such as the all-vegetarian Babe Country Cook Cookbook and a preserving book) but we have so many recipes in folders form the 6 magazines we get each month that we focus on those.
Speaking of magazines, have you guys received any extra mail lately?

I have to admit that I would like to try European butters (which we can actually get in stores here), though I doubt Baking Illustrated calls for anything that specific - perhaps the Legal Chef would say he only bakes with those, I wouldn't even be surprised.

Come to think of it, we did get an unexpected magazine: Elle Québec. But somehow, that doesn't scream "Rob and Jen" to me. Am I wrong?

Oooh! We just got Cook's Illustrated, addressed to the Engineer! :)

I wanted to share a great post on David Lebovitz's blog, about all the citrus at Central Market.