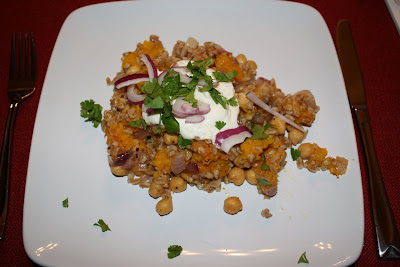 I got this recipe from Bon Appétit, where it is explained that the dish is called farrotto because it’s like a risotto, only with faro instead of rice. As I started making the recipe, I realized that I only had one cup of farro left (instead of the two the recipe calls for), so my ratios where a bit off. That being said, I was over the moon with this dish! It’s absolutely delicious, easy and healthy to boot. Note that I considerably cut down on preparation time by using some cooked squash left over from this recipe that I had frozen in the meantime. It’s about half a big squash, though you could use a whole small squash. I changed the quantities for the red onion so that you use all of a red onion, which I just find easier. I also used 1 tsp of Korean pepper instead of the 2 Tbsp of fresh jalapeño pepper. This can easily be made vegan by omitting the yogurt as garnish. 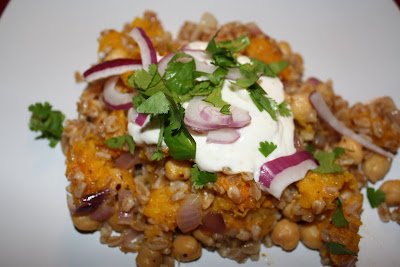