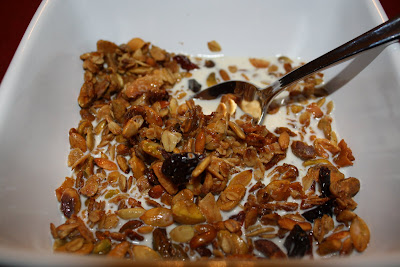 This granola recipe was originally made with dried apricots, but what I had on hand were dried cherries, so I decided to use that instead and it was delicious. I liked not only the taste, but the presentation of this granola, as it has more colors than those I normally make. I only now realize that it’s a recipe by Melissa Clark, she of the red lentil soup. It makes about 9 cups of granola. I suggest using two baking sheets instead of one, but then make sure to keep a close eye on it as it’s baking. If you’re making this without gluten, make sure the oats are certified gluten-free.

Transfer granola to a large bowl and add apricots or cherries, tossing to combine. Serve with plain lactose-free yogurt or milk, if desired. 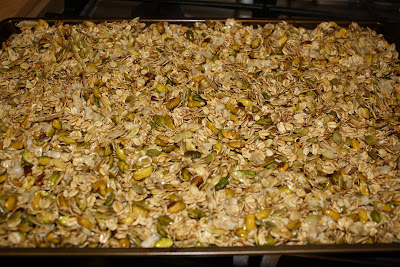