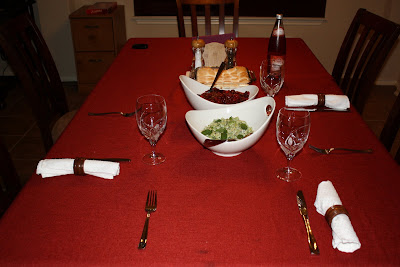 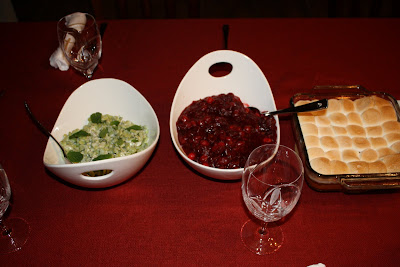 Here we are, the post with our Thanksgiving dinner! This year, the Engineer and I decided to do things the American way. I’ll tell you about our meal; the recipes are at the end of the post. I had always wanted to try a turducken, but since there were only three of us and turduckens often weigh over 20 lbs, we decided to go with a more reasonable turducken roast. All the turducken roasts we saw had the stuffing already inside, though, so I couldn’t try any stuffing recipes I wanted to make, but then again dinner was easier. Our roast had a wild rice stuffing. We still ended up with way more meat than we thought, because a turducken is entirely deboned, so a 5-lb roast is 5 lbs of meat, straight, without anything to cast aside! It was ready exactly when we thought it would be, at 6pm, so there was no delay for dinner. We were a little disappointed, though, because we couldn’t tell the three birds apart. (Also, when you see the final picture of my plate of food, rest assured that I didn’t eat all the poultry, it was just too much.) 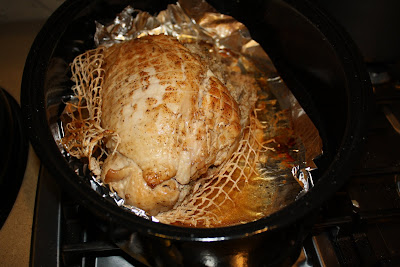 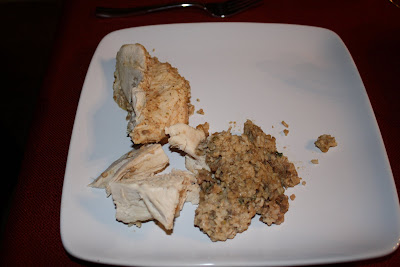 I usually make my orange-ginger cranberry sauce, which I absolutely love, but I was also dying to try Molly Wizenberg’s famous cranberry chutney, so that’s what I went with this year. It calls for dried cherries: in Montreal, it would have taken me several trip to various grocery stores to find them. Here, though, our local grocery store has two kinds (tart cherries and Bing cherries). I mean, not only does my local store have dried cherries, but I can choose what kind of dried cherries I want! Isn’t life wonderful? Anyway, as the chutney was cooking, it was like the vinegar picked up the cloves and their smell travelled through the entire house, so I was a little worried about the final taste – would it be sweet enough? It was, thankfully, and I really enjoyed it. The recipe made a lot, though, so we froze some, along with leftover turducken. I think next year, I might try adding dried cherries to my standard sauce and see how that goes.

I also wanted to make candied yams. Of course, in North America, what is marketed as a “yam” is actually a sweet potato. I happened to have cans of sweet potato purée (because when they went on sale, I couldn’t decide whether I wanted sweet potato pie or pumpkin pie, so I bought both; I decided on pumpkin pie in the end, but I wanted to use up the cans of sweet potato purée nonetheless). I used two of those (15 oz each), but really only because I had them on hand. In hindsight, you really do want to use pieces of sweet potato, not purée. That being said, I really liked this dish. Good thing it’s only once a year, though, because it’s like dessert as a side dish. I used this recipe from Cooks.com, but without the actual cinnamon candy (there are limits to what I’ll eat as a side dish).

Then, I needed something green, but I didn’t feel like doing the whole green bean casserole thing, so I made lima beans with a cumin mint dressing. We don’t drink much alcohol, so we had pomegranate soda. And pumpkin pie for dessert. It was a delicious meal! 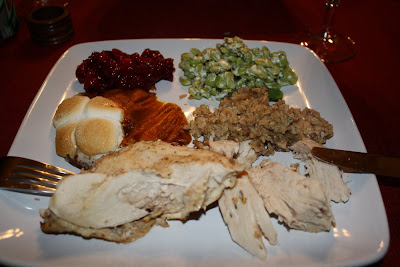 In a large, heavy-bottomed saucepan, combine the apricot preserves, raspberry vinegar (or vinegar and raspberry preserves), salt, cloves, and Grand Marnier. Stir to mix, and place over medium-high heat. Bring the mixture to a boil, and continue to cook – it will bubble aggressively, and you should stir regularly to keep it from scorching – for about 10-15 minutes, or until it has thickened slightly. It may seem like it’s still too thin, but keep in mind that it will thicken considerably as it cools. Reduce the heat to medium, add the cranberries, and cook until they are soft but not all are popped. (I know that they’re ready when I hear one or two of them pop; that’s a good indicator that most of them must be getting pretty soft.) Add the ginger and cherries, stir well, and remove from the heat. Cool completely before serving. The chutney will thicken considerably as it cools. 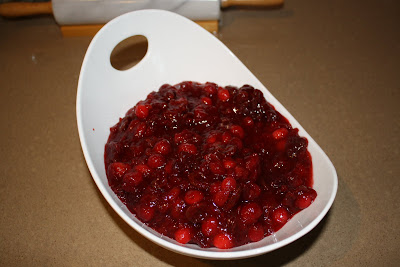 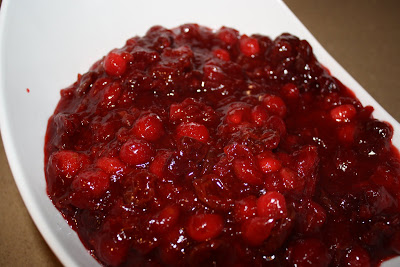 Preheat oven at 325 °F. Drain half of the juice from the can of sweet potatoes. Place in a casserole dish. Dot with butter (I must admit I totally forgot this step). Mix brown sugar and cinnamon together and sprinkle on top. Add cover top with marshmallows. Cover loosely with foil (again, I forgot) and bake for 20-25 minutes. 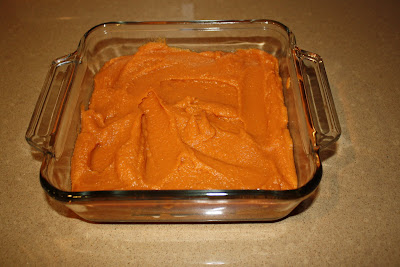 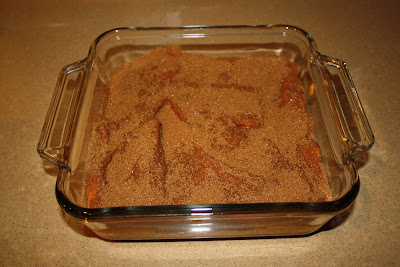 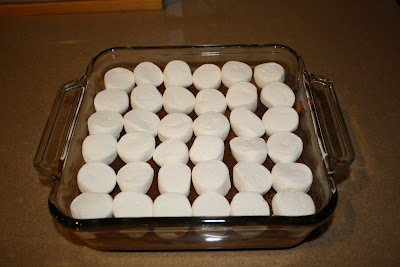 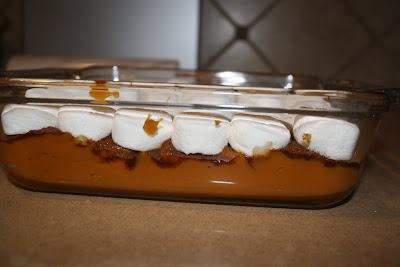 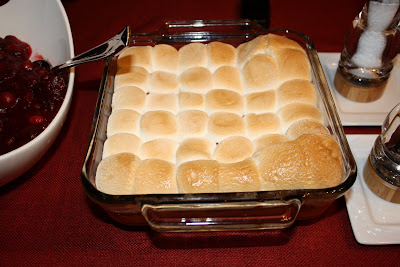