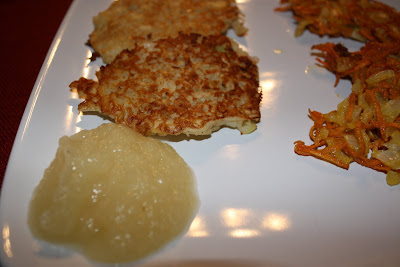 As of this fall, I already had three latke recipes: one from a newspaper clipping I’ve had since I was twelve, one from Chowhound and one from my friend Jen (not including variations like sweet potato latkes). But right before Hanukkah this year, my friend Jen shared a new recipe, published on the Bon Appétit website and created by a woman who makes literally hundreds of them for the holiday. So even though I was not in need of a new recipe, I decided to try them this year.

There are usually two basic points of view: the latke as potatoes held together by batter, and the latke as batter that contains potatoes. This latke is one that has a lot of batter. I tried my best to wring out the water from the potatoes, but I could only get ½ cup, whereas I was supposed to get at least 1 cup. Once the potatoes were mixed with the rest of the ingredients, though, they released more water that I scooped out of the bowl as best I could (you can always add more flour, which will create more batter for the latkes).

Another unusual point (at least for me) is that the potatoes are not grated, but are processed in the food processor. My whole life, I’ve been told to never put potatoes in the food processor, because something happens that makes them bad and… the space-time continuum is disrupted and the world as we know it might implode on itself. But since this expert was recommending the food processor, and since I trusted the recipe, I decided to take a leap of faith and process the potatoes. Nothing bad happened, which was a relief. The recipe serves about 4 as a side dish. I made them along with sweet potato latkes this year. I wanted to serve them with Tofutti’s sour cream substitute, but unfortunately I couldn’t find any at the store, so I only used apple sauce.

I’ll also share a link about how to deal with the latke smell that seems to inevitably permeate the house after making them! 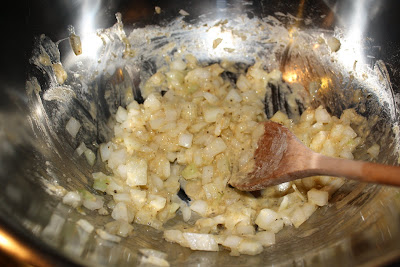 Place remaining 1 ¼ cups onions in processor; add potatoes. Blend until potatoes are very finely chopped and mixture is almost a puree (some liquid is forming). 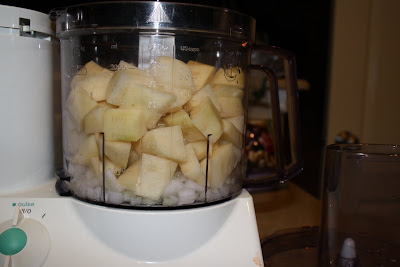 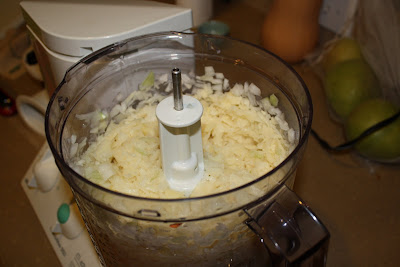 Scrape potato mixture into towel in colander. Wrap towel around potatoes and squeeze out as much liquid as possible (at least 1 generous cup). 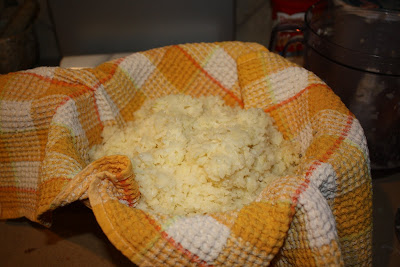 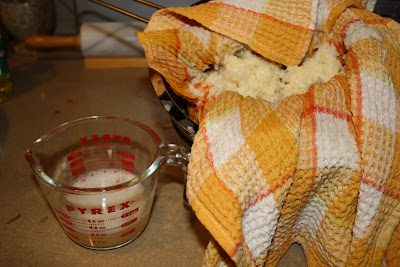 Scrape dry potatoes into egg mixture. Stir until batter begins to moisten and stick together. 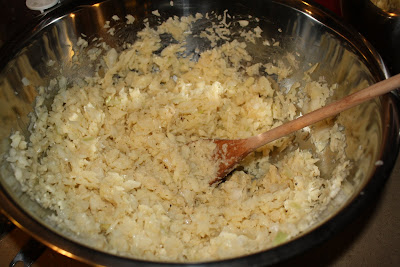 Heat 4 Tbsp vegetable oil in heavy large skillet over medium-high heat. Drop potato mixture by scant ¼-cupfuls into skillet; flatten each latke to 2 ½-to 3-inch round. Reduce heat to medium. Cook until golden, about 4 minutes per side. Transfer to large rimmed baking sheet. Repeat, adding more oil to skillet as needed. 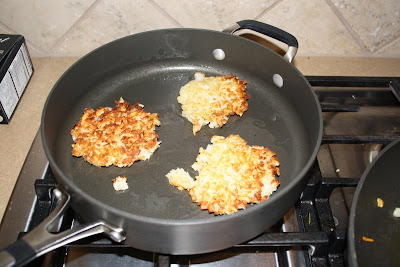 Latkes can be made 2 hours ahead. Let stand at room temperature. Or up to 1 day ahead: cover latkes on sheets and refrigerate. To make latkes ahead: Preheat oven to 425 °F. Bake latkes until crisp and deep brown, 5 to 6 minutes per side.

To serve the latkes right away: Preheat the oven to 325 °F. Place latkes on a baking sheet as they come out of the skillet and keep them warm in the oven. 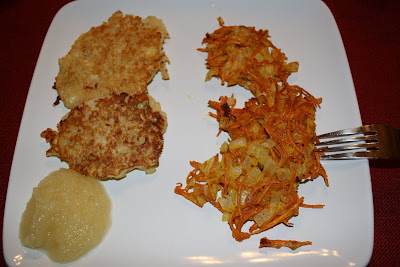