I decided to end the suspense regarding our lack of bookcase in the kitchen. We have finally found what we needed, at an affordable price: it’s actually two pieces of furniture that are meant to be used as sides for an entertainment center. Together, they take up exactly 32 inches of wall space, which happened to be exactly the space we had between the windowsill and the light switch on the other side. As a bonus, we ended up having a spot to display our items from Le Creuset (the Dutch oven I got last Christmas and the beautiful kettle I just bought). The main purpose of this was to store our cookbooks, though. I have to say that now, our collection doesn’t look nearly as massive as it did in our previous, smaller kitchen. That’s a good thing, because a lot of items on my Christmas wishlist this year are cookbooks! 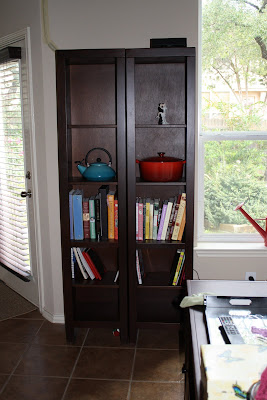 I’ve also moved the spices from the pantry to an open area. As much as I liked having the spices out of sunlight, there was one avalanche too many (I had rigged one of the bleachers to be higher than the other one, but it was a bit tilted). Also, I couldn’t see clearly any of the labels, and the spices in the back were not easily accessible. Things are much better now. The vacant space in the pantry was quickly reclaimed as various ingredients naturally expanded on the shelf (same number of total items, but lower density). 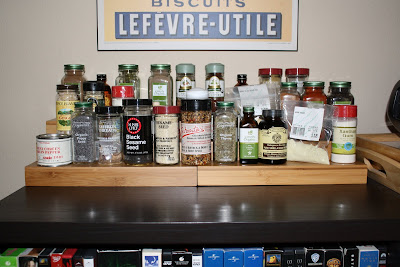