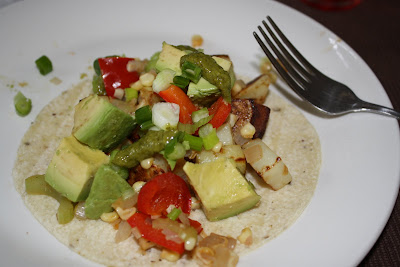 Tacos de papa is Spanish for “potato tacos” (not French for “Dad’s tacos”). I decided to make this as our first meal in San Antonio, to detox a bit from all the unhealthy food we’d had on the road and to eat something with a little Tex-Mex influence. It was presented on The Kitchn as an “easy weeknight dinner”. Easy, sure, but weeknight? Good thing we were still on vacation. Granted, I always have a leisurely pace in the kitchen (especially when it’s not really my kitchen, as is the case in our rental apartment), but what with all the chopping and cooking, it took almost two hours – and that’s with store-bought tortillas and no poblano peppers! It was really good, though, so I’ll keep the recipe, but it’s not what I’ll make if I’m in a hurry. 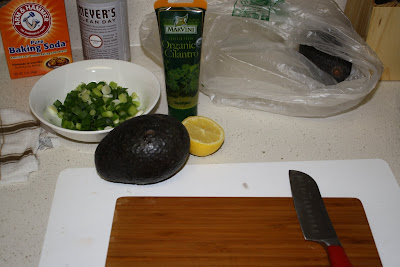 In a skillet, pour 3 Tbsp of the olive oil, add the potatoes and fry them until crispy and brown on the outside and cooked inside.

While the potatoes are cooking, pour the remaining 1 Tbsp of the olive oil to another skillet and cook the onions, garlic, celery, bell pepper, and corn. Add salt and pepper to taste; juice the lime, add it to the skillet and cook on low for 5 minutes. Stir well. 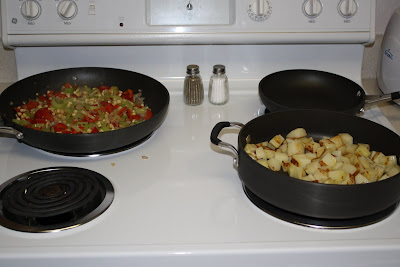 Heat a large skillet or griddle and warm up the tortillas on each side, about 5 minutes per side (warming them helps to soften them).

To assemble the tacos, place some potato on the tortilla, then the veg/lime mixture, and top with scallion, cilantro, and avocado.

As a bonus: did you know that to prevent an avocado from browning, storing it with a red onion (or leftover shallots, in my case) works better than lemon juice or tight wrapping? 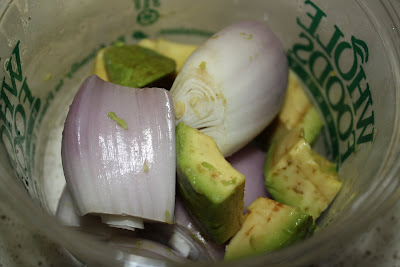