If you’re like me, you probably have a bag of stale instant popcorn in the back of your pantry. It’s not so far expired that it would make you sick, but it’s definitely past its prime. You want to get rid of it; throwing it away would be a waste, but you might want to “enhance” it a bit before you eat it. Enter: peanut butter popcorn (adapted from a recipe I found as part of a peanut butter feature on The Kitchn). It’s soft and gooey, unlike crunchy caramel popcorn, and easy to make, too. It keeps overnight (and gets gooier), but is best eaten the day it is made. It’s very rich, though, so don’t make a habit of it!

Mix the honey and brown sugar in a small saucepan and bring to a boil. Let it simmer for a couple minutes, then remove from the heat and add the peanut butter. Stir vigorously until all the peanut butter is melted, then mix in the vanilla.

Immediately pour the peanut butter caramel over the popcorn and stir with a long-handled wooden spoon until it's all coated. Once it's mixed, you can transfer it to a serving bowl. Cover tightly after it's cooled. 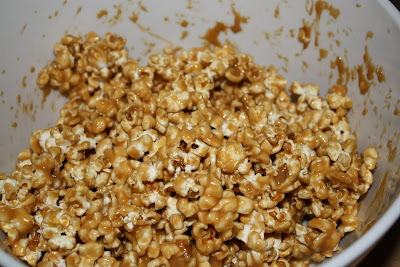