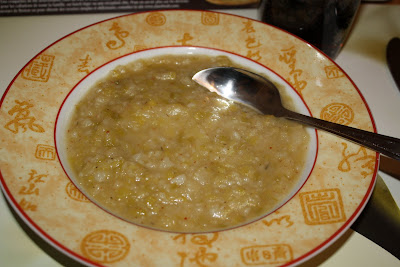 My mother had a great recipe for potato-leek soup. She still has it, but I use the past tense here because that recipe is from a time before I became lactose-intolerant – and since it calls for a cup of cream, I gave up on it. But I recently came across David Lebovitz’s potato-leek soup, which is vegan. I decided to give it a go, and I’m really glad I did.

The only problem I encountered is the fact that I do not have an immersion blender – or a blender, for that matter. And since you cannot put potatoes in the food processor (they turn all gummy), I was a little stuck. I ended up mashing the potatoes in the pot with a potato masher. The soup tasted wonderful, but the consistency was not as smooth as I would have liked. I’ve now decided to get an immersion blender (I’ve done some research and added one on my Amazon wish list), but until then, the potato masher will have to do.

If you’re not used to leeks, the most important thing is this: wash them correctly. You need to cut off the tip with the roots, then cut the leek lengthwise and put each half under running water, to get the sand/grit out from in-between each layer. So it’s different from other vegetables in that the dirt is inside, not just outside, but once you know that, it’s easy to handle. (The reason I bother mentioning this is because I still remember having a restaurant meal once where the chef didn’t know how to clean leeks – nobody likes a mouthful of sand, trust me.)

I also reduced the amount of water called for, and added about a ¼-cup after mashing the potatoes to get the desired consistency. I’m giving you here the amount of water I started with, but of course that depends on the pot you’re using. You can also use vegetable broth. 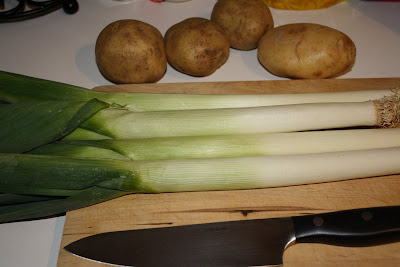 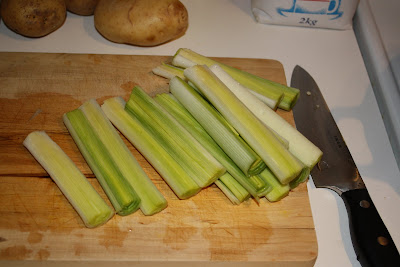 In a large pot, heat the olive oil over medium heat. Add the slices leeks and season with salt. Cook the leeks over moderate heat for 5-7 minutes, stirring frequently, until they're completely soft and wilted. 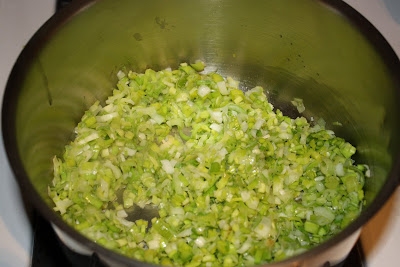 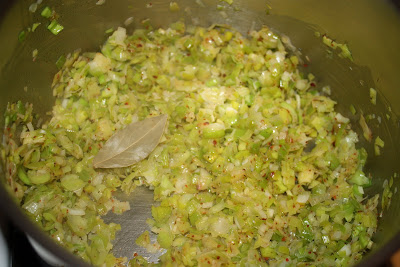 Add the thyme, if using, and chilli powder, and stir for about 30 seconds, cooking them with the leeks to release their flavours. 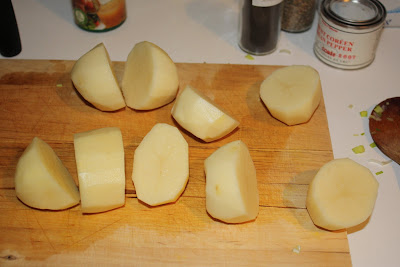 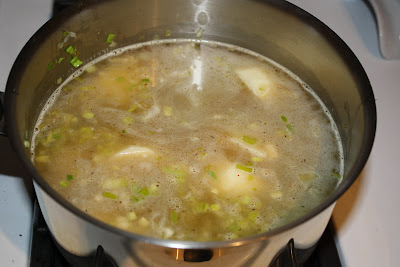 Pour in the water, and add the potatoes and bay leaf. Cover and simmer until the potatoes are tender when poked with a sharp knife. Depending on which potatoes you use, it could take anywhere from 15 to 30 minutes.

Pluck out the bay leaves and puree the soup with the white pepper, seasoning with more salt if necessary. Use an immersion (stick) blender, or a standard blender, or a potato masher. If the soup is too thick, add a bit more water, until it's the desired consistency. 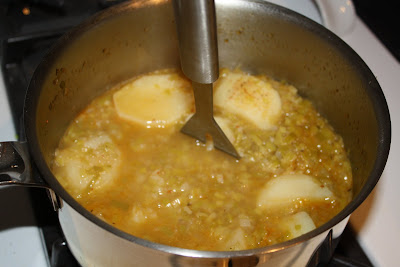 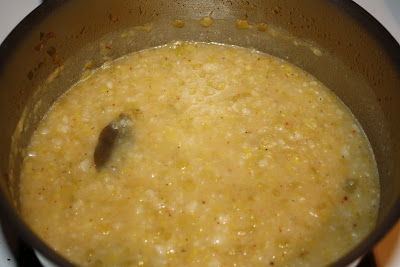 I served it here with crackers, sharp cheddar (I like Irresistibles’ Extra Sharp White Cheddar, because it tastes great and is lactose-free) and pumpkin marmalade. 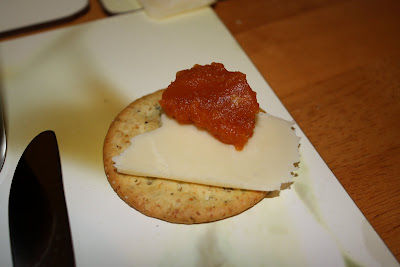