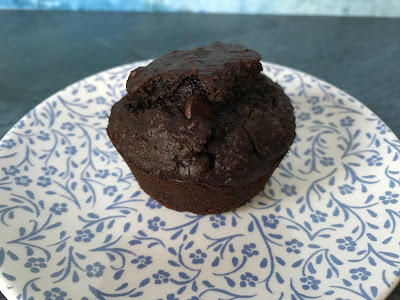 I was trying to get more fiber into the Fox’s diet, so I made blueberry flax muffins and oatmeal blueberry flax muffins, neither of which were very good. I made apple applesauce muffins, only to realize that the kids eschewed the apple chunks. (I also tried another recipe for lactation cookies, omitting the brewers’ yeast, but those were a flop – my “regular” ones are better and were heartily consumed.)
Then I decided to go in another direction and make chocolate muffins. But as it turns out, the recipe I picked, double chocolate tahini banana muffins, was relatively healthy and actually had flax seed and oats as well! It’s made using Soom Chocolate Sweet Tahini, of which I’ve been a big fan for years now (I first talked about it here). Note that the original instructions say that if you don’t have Soom Chocolate Sweet Tahini, you can replace it in this recipe with 1/3 cup + 2 Tbsp. tahini plus 2 Tbsp. maple syrup plus 2 Tbsp. cocoa powder, in addition to the ingredients already called for (meaning, still use the maple syrup and cocoa powder that are already written down below).
These muffins were a hit with everyone! The exterior was slightly crisp, the crumb was fluffy, they all rose enough that the top cracked and made them look like they were wearing little top hats. They were delicious and will keep well at room temperature for a few days in an airtight container, though you could also keep them in the fridge or freeze them for later.
3 medium-large overripe bananas
1 large egg
½ cup Soom Chocolate Sweet Tahini
1/3 cup maple syrup
½ cup unsweetened vanilla almond milk
2 Tbsp. melted and cooled coconut oil
2 tsp. vanilla extract
2 cups rolled oats
2/3 cup unsweetened natural cocoa powder
2 Tbsp. flaxseed
1 tsp. baking soda
1 tsp. cinnamon
½ tsp. salt
¾ cup semi-sweet chocolate chips
Preheat oven to 425 °F. Line a standard 12-cup muffin tin with liners and spray lightly with nonstick spray (I only greased a muffin tin instead of using liners, and got a total of 14 muffins).
In a high-speed blender, combine bananas, egg, Soom Chocolate Sweet Tahini, maple syrup, unsweetened vanilla almond milk, coconut oil, vanilla extract, oats, cocoa powder, flaxseed, baking soda, cinnamon, and salt. Blend until smooth – about 30 seconds to 1 minute at the most (over-blending will make them tough).
Add chocolate chips to the batter and stir to combine with a spoon.
Fill muffin tins about ¾ of the way full. Sprinkle the tops with extra chocolate chips, if desired.
Bake for 5 minutes, then lower heat to 350 °F (leaving the muffins in the oven). Bake for an additional 10-12 minutes or until muffins are set and spring back when you press on the tops.
Let muffins cool in the tins for 10 minutes, then let cool for an additional 10 to 15 minutes on a cooling rack. 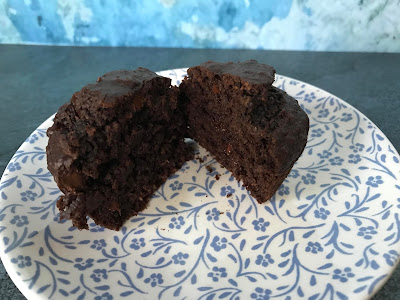