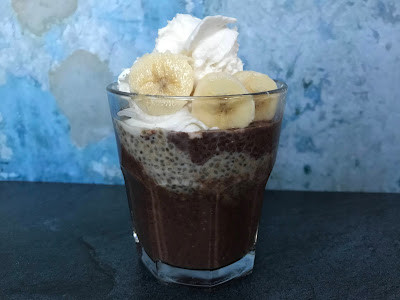 I decided to make something fun but still healthy-ish for breakfast: these peanut butter chocolate chia puddings. I doubled the original recipe to have enough for a few days (quantities below are mine) and separated the ingredients for each part of the pudding because it was clearer for me, but keep in mind that the ingredients will be repeated. The Little Prince thought it was okay, the Fox refused to taste it despite the chocolate, and I liked it but thought there’s room for improvement. I felt like the peanut butter didn’t mix well with the pudding, so maybe I’d use a natural nut butter (or sun butter) instead of regular peanut butter next time, or I’d make the whole thing chocolate. I would also use less milk – you can always add more later if you want, but I’d prefer a thicker consistency, so I’d start with maybe 2 cups for the chocolate pudding and 1 cup for the peanut butter pudding.
For the chocolate pudding
11 Tbsp. chia seeds (= ½ cup + 3 Tbsp.)
½ cup cocoa, sifted
2 2/3 almond milk or lactose-free milk of choice (see note above)
½ cup maple syrup
2 tsp. vanilla
½ tsp. salt
For the peanut butter pudding
5 Tbsp. chia seeds
1 1/3 cup almond milk or lactose-free milk of choice (see note above)
¼ cup peanut butter (see note above)
2 Tbsp. maple syrup
1 tsp. vanilla
¼ tsp. salt
¼ tsp. cinnamon (optional)
To garnish (optional)
vegan whipped cream (I liked both almond and coconut from a pressurized can)
fruit, such as sliced bananas or raspberries
chocolate shavings or sprinkles
chocolate syrup
In a medium bowl, mix the ingredients for the chocolate pudding until combined.
In a small bowl, mix the ingredients for the peanut butter pudding until combined.
Place both bowls in the fridge and let them sit overnight, or at least 3 hours.
To arrange, scoop desired amount of chocolate pudding into a cup or bowl, top with a scoop of peanut butter pudding, then add another chocolate layer. Top with whatever you’d like!
Posted by Amélie at 4:10 PM