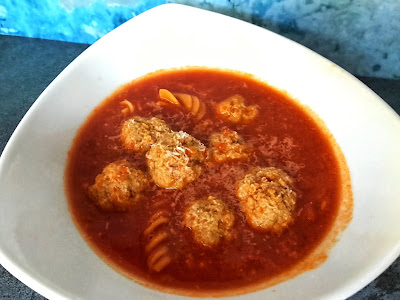 The Fox is being a typical toddler and refusing to try many new foods (the Little Prince was less extreme than this at the same age, and he has now started at least tasting most of the food on his plate, so even if he doesn’t like dinner I’m not worried about him). I wanted to get more vegetables in the Fox’s diet, and I remembered I had Jessica Seinfeld’s Deceptively Delicious, which I hadn’t pulled out in a long, long time.
I first want to address a common criticism of Jessica Seinfeld, one that I feel everyone makes, which is that you shouldn’t hide the vegetables from your kids because they need to actually learn to eat them. I want to make it clear the Jessica Seinfeld agrees! She has said, on multiple occasions, that hiding vegetables in food is a good short-term solution to make sure your kids eat some vegetables today, but you *must* continue to serve (visible) vegetables on the side. This will a) give your kids the opportunity to try them, again and again, and b) teach them what a balanced meal looks like. Also, many recipes have something like ½ cup or 1 cup of vegetable purée in the whole dish, so you might be getting at most 2 tablespoons of purée on your plate, which is not a whole serving of vegetables anyway.
Now, as for this meatball soup recipe… It was originally supposed to yield 10 servings, according to the book. I don’t know in what universe half a pound of meat, 3 ounces of pasta and 3 cups of broth make 10 servings! What I did was double the recipe, though I only used 4 cups of broth (the amounts below are mine). We had enough for two family meals and we’ve even got some in the freezer (though had I planned ahead, I would only have added pasta to what I was serving right then and there, and not in the portion that was frozen). The Engineer and I really liked it; the Little Prince liked it so much that he complimented me on it; the Fox refused to taste it.
6 oz short pasta like farfalle (I used rotini)
1 chopped onion
2 (28-oz.) cans whole peeled tomatoes
½ cup carrot purée (I used jarred baby food)
2 tsp. salt, divided
4 cups chicken broth
6 slices whole-wheat bread, in small cubes
2 large eggs, lightly beaten
½ cup lactose-free milk
½ cup sweet potato purée
¼ cup grated parmesan cheese, plus more for serving
¼ tsp. pepper
¼ tsp. paprika
1 lb. lean ground turkey
Cook pasta al dente; drain and set aside.
Meanwhile, coat pot with nonstick spray (I used oil) and cook onion until soft.
Purée tomatoes and their juice with carrot purée; add to pot along with 1 teaspoon salt. Add broth, reduce heat to low, cover, and simmer for 10-15 min.
Mix bread with egg, milk, sweet potato purée, parmesan, 1 teaspoon salt, pepper, and paprika. Let soak until soft, then add turkey and mix again. Form into mini meatballs ½ inch in diameter.
Add the meatballs into the pot. Simmer 10-15 minutes. Stir in pasta. Serve sprinkled with parmesan.
Posted by Amélie at 10:48 AM