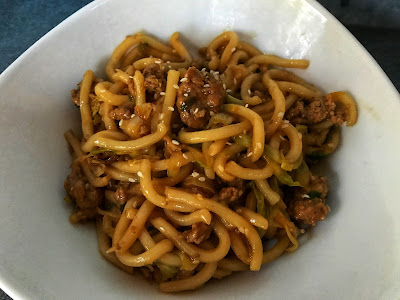 I made these stir-fried udon noodles with pork, doubling the recipe to have leftovers, and I was surprised to realize that I had used up a whole head of cabbage that basically went unnoticed in this dish! Moreover, it was delicious, and I heartily recommend it. The original recipe says that you can make it vegetarian by using the same weight of shiitake or cremini mushrooms instead of the pork.
The amounts below will yield about 4 servings, but as I said, feel free to double it (just be careful because your wok will be very full by the end). I’m definitely going to have to make this again!
2 Tbsp. vegetable oil, divided
4 cups coarsely chopped green cabbage (from about ½ small head)
2 7-oz. packages instant udon noodles, flavor packets discarded
2 tsp. toasted sesame oil
8 oz. ground pork
5 scallions, white and pale green parts coarsely chopped, dark green parts thinly sliced
2 tsp. finely grated fresh ginger (from a 1-inch knob)
1 pinch Korean pepper (or more, or red pepper flakes, to taste)
1/3 cup mirin
1/3 cup soy sauce
1 Tbsp. toasted sesame seeds, plus more for serving
Heat 1 tablespoon vegetable oil in a large skillet (I used a wok) over medium-high. Add cabbage and cook, tossing often, until edges are browned, about 4 minutes. Reduce heat to low and continue to cook, tossing often, until thickest parts of cabbage leaves are tender, about 4 minutes longer. Remove from heat and set skillet aside.
Place udon in a large heatproof bowl (or pot if you don’t have one) and cover with 6 cups boiling water. Let sit 1 minute, stirring to break up noodles, then drain in a colander. Transfer noodles back to bowl and toss with sesame oil. Transfer cabbage to bowl with noodles. Wipe out skillet.
Heat remaining 1 tablespoon vegetable oil in same skillet over medium-high and add pork, breaking up and spreading across surface of pan with a spatula or tongs. Cook pork, undisturbed, until underside is brown, about 3 minutes. (The pork will never brown if you’re fussing with it the whole time, so when they say “undisturbed,” that means keep your hands off it and let the heat of the pan and the pork do their thing!) When pork is browned, break up meat into small bits. Cook, tossing, just until there’s no more pink, about 1 minute. Add chopped scallions (the pale parts), ginger, and red pepper. Continue to cook, tossing often, until scallions are softened and bottom of skillet has started to brown, about 1 minute.
Add udon mixture, mirin, and soy sauce and cook, tossing constantly, until noodles are coated in sauce (be sure to scrape bottom of skillet to dissolve any browned bits), about 45 seconds. Remove from heat and fold in 1 tablespoon sesame seeds and dark-green parts of scallions. Top with more sesame seeds before serving.
Posted by Amélie at 3:08 PM