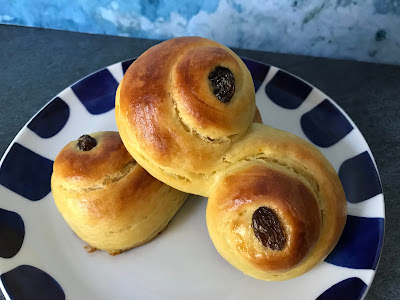 December 13th is Saint Lucy’s Day, so I figured this was the perfect time to share a recipe for lussekatter, which are Swedish buttermilk saffron buns typically served on that day. I’m told that the name is a combination of “lusse” for Lucy and “katter” meaning cat, because the buns apparently resemble the top of a cat’s face, with the raisins standing in for eyes. Honestly, you have to use your imagination here! (There’s also a legend that Saint Lucy tore out her eyes to give them to someone who admired them, but I don’t want to go down that path.)
I first saw the recipe on Call Me Cupcake, where they looked absolutely delicious! I thought about making them with dried cranberries instead of raisins, but changed my mind (though currants would be good too). My kids would have preferred them without *any* dried fruit, as it turns out. I wonder what would happen with chocolate chunks instead?
It seems that they dry out quickly, though, so any leftover buns should be promptly packed in an airtight container or frozen. Also, given that, I was afraid to bake them at the recommended 480 °F, so after consulting another recipe that baked them longer at 400 °F, I settled on the original amount of time at 450 °F. The directions below are mine and I was happy with the result, though the Engineer found them dry anyway. If this happens to you, you can always warm them up in the microwave wrapped in a moist paper towel.
These buns are tasty and not too sweet, which makes them great for breakfast. Also, FYI, Call me Cupcake has a recipe that combines lussekatter with cinnamon buns, if you are so inclined.
For the buns
½ g saffron
1 Tbsp. granulated sugar
1 Tbsp. cognac or vodka
25 g active dry yeast (which was about 2 Tbsp. + 1 tsp.)
2/3 cup lactose-free buttermilk (lactose-free milk works too)
1/3 cup + 1 ½ Tbsp. lactose-free cream or coconut milk
1 large egg
1/3 cup + 1 ½ Tbsp. (90 g) granulated sugar
100 g (1 scant stick) lactose-free butter, at room temperature
3 cups + 3 Tbsp. (450 g) all-purpose flour
½ tsp. salt (I used Murray River salt)
about 40 raisins
enough glögg (mulled wine) or water to cover the raisins
For the egg wash
1 egg
1 pinch of salt
1 Tbsp. lactose-free cream or coconut milk
Grind saffron and 1 Tbsp. granulated sugar in a pestle and mortar. Put in a small bowl and mix with cognac or vodka. This mixture can be prepared up to one month ahead for more flavor, but about 20 minutes before starting the dough works too.
Put buttermilk and cream in a saucepan and heat until approximately 98.5 °F (37°C). In a large bowl (I used the bowl of my stand mixer), add a little of the liquid to the yeast and stir until it has dissolved, then add the rest of the liquid, the saffron mix, the egg and sugar and stir until sugar is dissolved.
Slowly add half of the flour while working the dough with the dough hook attachment. You can of course also work the dough by hand but it will take longer. Add the salt and the butter and work until incorporated into the dough.
Add the rest of the flour (or as much as needed) and work into a very smooth dough, about 10-15 minutes on low by machine. The dough should be very elastic, smooth and sticky to the touch – if you pick up a piece and pull it apart it shouldn’t snap immediately.
Leave the dough to rise, covered with a cloth, for 60-90 minutes or until doubled in size. (I do this in an oiled bowl that I place in the microwave with the door ajar.)
Meanwhile, put the raisins in a bowl and cover them with glögg or water. This is done to not dry out the buns.
Now it’s time to shape lussekatter! Divide the dough into equally large portions (I used 50 g of dough for each bun and got a total of 20 buns) and shape each bun like an “S”. The trick is to roll them out really long to make them extra swirly. Prepare two baking sheets with silpat or parchment paper. Transfer buns to baking sheets. Leave some space between them as they will rise even more. Put two raisins in each bun (as pictured).
Cover the buns with clean kitchen towels and leave to rise for 45 minutes. Preheat oven to 450°F.
Brush buns with egg wash. Bake for about 7-8 minutes or until golden brown, depending on the size of the buns.
Let cool under a clean kitchen towel. 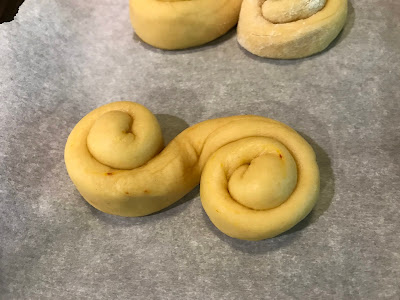 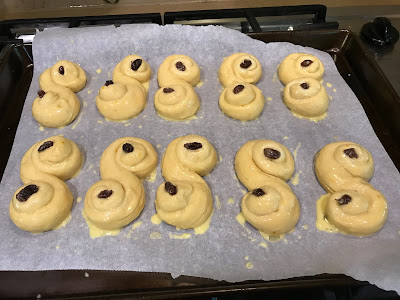 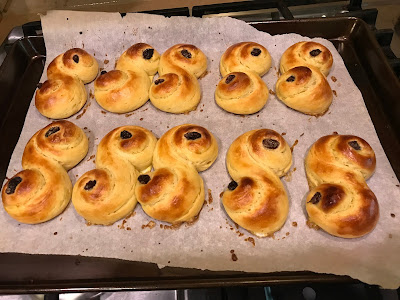 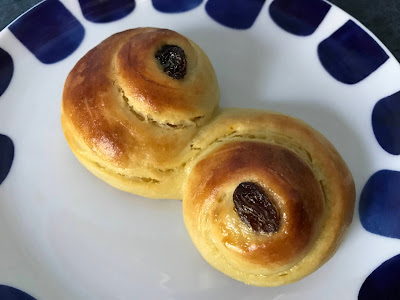