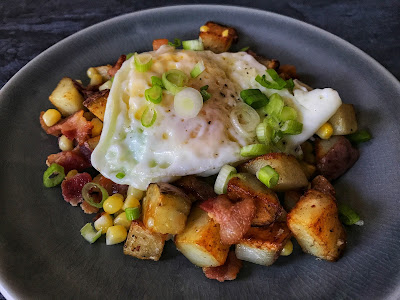 This dish from Smitten Kitchen was a big hit! It took a while to prepare, but was entirely worth it. The Little Prince now likes potatoes, but only as long as they are prepared this way (my mother also sometimes made pan-roasted small-dice potatoes like these when I was a kid and I *loved* them, so I guess he does take after me sometimes).
½ lb. thick-cut bacon, cut into small dice
1 lb. red potatoes, scrubbed clean and diced into ¼- to ½-inch cubes (about 3 to 3 ¼ cups)
salt and freshly ground black pepper
4 medium-large ears corn, kernels cut from the cob (2 ½ to 3 cups)
1 bundle scallions, thinly sliced
fried egg (optional)
Toss bacon into a large skillet over medium heat; no need to heat the pan first. Let rest for a few minutes until it starts sizzling, then move the bits around so that they begin to brown evenly. Again, wait a couple minutes before shuffling the pieces around; you’re looking for them to get evenly golden and crisp. This should take about 10 minutes. Remove the bacon bits with a slotted spoon, leaving the drippings in the pan and transferring the bacon to paper towels to drain.
Heat the pan to medium/medium-high, making sure the bacon fat is sizzling, then add your potatoes all at once in a single layer. Sprinkle them with ½ teaspoon table salt and several grinds of black pepper. Let them cook for a few minutes in one place and get a bit golden underneath before turning them over and moving them around. Repeat this process until the potatoes are browned on all sides; this takes about 20 minutes. (At this point, you can push aside the potatoes and pour or spoon off all but a small amount of the fat and reserve for the egg.)
Bump up the heat a little and add the corn to the skillet. Sauté the potatoes and corn together until the corn gets a bit brown but stays fairly crisp, about 4 to 5 minutes. Add the drained bacon, and stir the mixture together until it’s evenly warm, about 1 more minute. Remove the skillet from the burner and sprinkle the scallions (reserving a few spoonfuls if you’d like to use them as garnish) over the hash. In 2 minutes, they should be warm and mellowed. Season with more salt or pepper to taste, if needed.
If you choose to fry an egg or two, I recommend doing so in the bacon fat. Fry and season to your liking – I made mine still a bit runny in the middle, but both my kids prefer a solid yolk. Serve on top of a pile of bacon hash and garnish with reserved green onions. 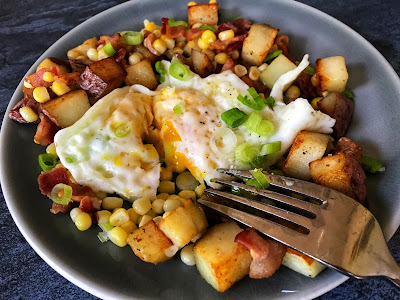