The making of this top turned into a bit of a saga. (I’m still not sure whether I should call it a sweater, an open cardigan, or a wrap! I think all those terms are technically correct, but I keep switching from one to the other when I talk about it.) That being said, I realize not everyone wants to hear about all the details, so I’ll start by telling you about the pattern itself. 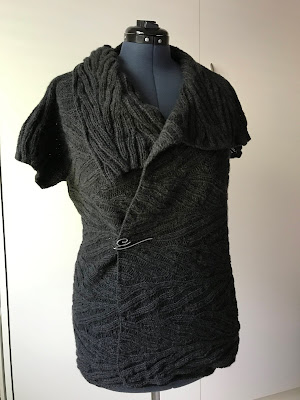 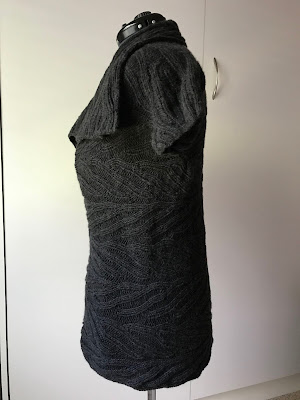 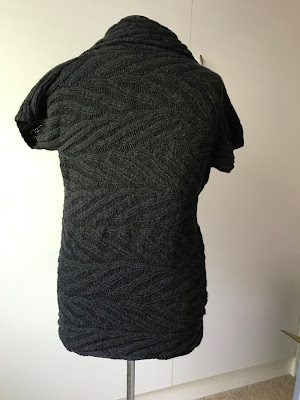 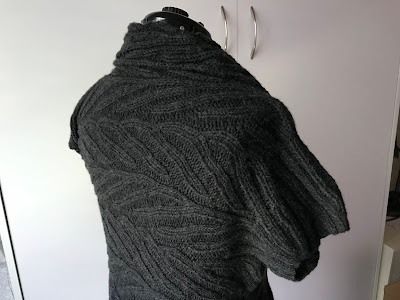 It’s Adam’s Ribs cap-sleeved wrap, designed by Carol Sunday of Sunday Knits; you can buy it here or on Ravelry. (It might be tricky to wear, given that it’s a short-sleeve garment yet it’s made for cold weather. As I was writing this post and looking it up on Ravelry, I realized that it now comes in a version with long sleeves, and that might work better for some people!) I have a shawl pin that I finally get to use to wear this, but you can also make a buttonhole or, better yet, a button loop on an edge to close it.

It’s a simple stitch pattern, designed over 7 rows and multiples of 12 stitches (though the full pattern is over 24 stitches). And it looks very impressive, but it’s sort of like ribbing that wanders to one side and the other, so it’s not hard to knit. It’s actually quite easy to memorize once you’ve repeated it a few times. It’s also reversible, which is nice! The wrap is knit side-to-side, from right to left, with only a few seams at the sleeves (shoulders and underarms). In order to keep everything straight as I was knitting, I ended up using just about every stitch marker and lifeline I had, so to simplify things and prevent a giant tangle, I actually finished each sleeve as I was knitting instead of leaving them both on stitch holders and finishing them at the very end. (So once I had passed the right armhole and was knitting the back, I put that on hold to finish the right sleeve, and did the same for the left sleeve once I was knitting the left front. It made things easier for me and I recommend that method.)

I learned new techniques with this pattern: Carol Sunday has created a method for wrapless short rows that works really well, and I familiarized myself with purled left increases. Overall, the pattern is easy to follow and quite well written; you should trust that it will all make sense in the end, EXCEPT where it says “Start every row with Section A” – ignore that and don’t change anything in the pattern (you’re actually starting every ODD row with Section A, as usual). Also, the pattern doesn’t mention this, but definitely use stitch markers!


So, for the personal saga… I started out with 5 skeins of Malabrigo Rios in Plomo (100 grams each). This was yarn that I had set aside specifically for this project, but… literally years ago. I just got really busy knitting for babies (mine and other people’s), and making small projects like hats when I didn’t have time to tackle something big. My receipt is dated from September 2012! But again, I was actually looking forward to using the yarn this whole time, so it wasn’t a matter of not wanting to work on this project, it was just being too busy to get started.

In the summer of 2018, while in Montreal, I finally got around to knitting several test squares to see how it looked on needles of various sizes, then I knit even more samples in the pattern stitch to try to get the gauge right. But oh, God, the gauge! Carol Sunday measures gauge in inches per stitches, as opposed to stitches per inch. Her explanation is here – it really does make more sense, but it’s hard to get used to. And I couldn’t get it quite right, even with blocking. I set it aside that summer because I was waiting to come back home and see whether I had a pair of 7mm needles in my stash, since I did own some seldom-used needles that I hadn’t brought with me on vacation and I didn’t want to buy doubles. Turns out I didn’t, so I bought some, and knit my sample in San Antonio. And you know what? It came out weird, so I went right back to the pair of 6.5 mm needles I already owned (I’ve since used the 7 mm needles for something else, so acquiring them was not a waste, but it was still incredibly frustrating at the time). I literally used up almost a whole skein in test squares! I eventually said “screw it”, because perfect is sometimes the enemy of good, and 6.5 mm would do just fine.

I forged ahead that fall, but ran out of yarn when I got about two thirds of the way through. And it’s dyed in lots of 10 skeins, so obviously it was impossible to get more of the same dye lot from 2012. I can’t even tell you how frustrated I was at that point! I had basically trusted that Past-Me had done the math right – it did work out by weight of yarn, but I couldn’t clearly remember doing the calculations, and Past-Me was less experienced, so there you go. I sewed up the one sleeve I had to try it on and decided that I liked the look of the half-finished sweater enough that I really did want to make it again. 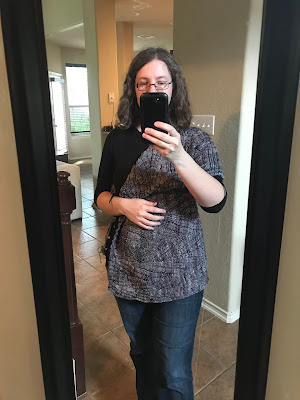 I searched and searched for something else. I looked at what others had done on Ravelry, and there were three sweaters that I really liked (one, two, and three). Two of the three knitters had used the yarn that was called for in the pattern, the Nirvana 5-ply sold by Sunday Knits, so I caved and bought some in Charcoal, the same colorway as the pattern. It’s a mix of Australian merino and Mongolian cashmere, humanely sourced and everything, and it’s worsted weight. It’s not cheap, obviously, but I really wanted this sweater. I bought the 9 skeins recommended for my size in the pattern (50 grams each), but I used not quite 8, so I still have to figure out a small project to do with the rest. As well as something to use up the 5 skeins of Malabrigo Rios, also worsted weight!

Anyway, at least now that I’m finished with it, I’m very happy with the result. 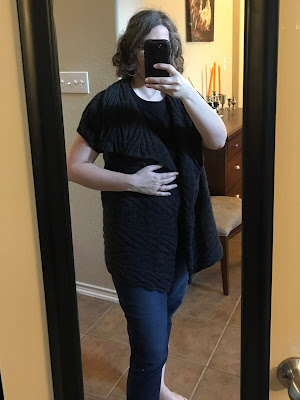 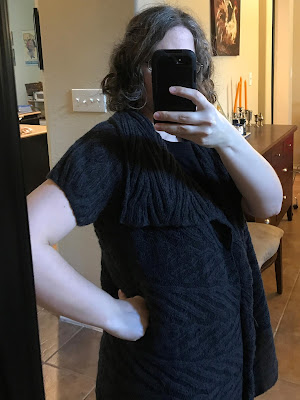 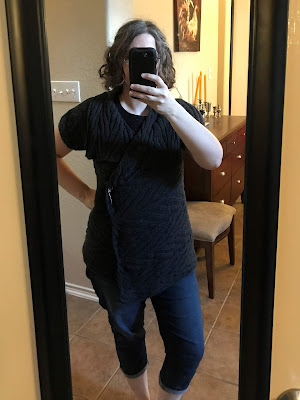