- There’s a new way to reduce food waste, by making produce last longer. The company behind this is Apeel (what a great name!), and they’ve developed an edible plant-derived material that is applied to fruits and vegetables before shipping them to the grocery store. This reduces oxidation and water loss, thus slowing decay.

- I read this article stating that one should not look at a restaurant menu ahead of time (unless one suffers from genuine dietary restrictions). I read it to see the rationale behind it, only to come away thinking that the problem here isn’t that the author was making a choice ahead of time, but that he was essentially planning to coerce fellow dinners into ordering meals according to his own taste as well. How rude!

- 16 things Marcella Hazan taught us about Italian cooking. I’m a big fan of her tomato sauce, so I enjoyed these!

- I very much liked these two essays: A woman’s greatest enemy? A lack of time to herself. and Women don’t need “me time” – we need help.. In essence, not only is women’s time interrupted more often than men’s (including at work), but we tend to feel like we cannot take time to ourselves unless all the work is done. While I can see the wisdom (or necessity) in leaving some work undone to do something more fulfilling, I tend to feel unable to relax knowing that I have a to-do list hanging over my head, and guilty if I ask my husband to watch the kids solo while I do something else. A quote from each article, to whet your appetite: “Feminist researchers have also found that many women don’t feel that they deserve long stretches of time to themselves, the way men do. They feel they have to earn it. And the only way to do that is to get to the end of a To Do list that never ends: the chores of the day, as Melinda Gates writes in her new book, killing the dreams of a lifetime.” And “Y’all, if a mom is burnt out from everyday life she does NOT need a pat on the head and a pedicure, she needs HELP. […] It’s not so much the term ‘me-time’ that gets under my skin, but the thought that merely giving a mother an hour or two to ignore her problems only to come home to the same amount, if not MORE, shit for her to do is asinine.”

- Extroverts are better than introverts at facial recognition. I find this super interesting because as an introvert, I sometimes fail at facial recognition, and if I try to match a name with a feature, I sometimes choose a non-permanent feature, and that’s not always a good strategy, For example, if I meet a new woman, I might remember that So-and-so is the woman with the big hoop earrings. But if the next time I see her, she’s wearing diamond studs, then I’m SOL. The Engineer has this worse than I do, but still. Anyway, the finding still raises a lot of questions: are introverts bad at recognizing faces because of the way they’re wired or because they inherently meet fewer people? Or is there a self-feeding loop where an introvert with social anxiety might have trouble with faces and then feel even more socially anxious because of it and want to meet even fewer people?

- Having an older brother is associated with slower language development. That’s certainly true at our house! (Sample size = 1.)

- On the bright side, the critical period for the acquisition of a second language seems to stretch to about 17 years old, so there’s still hope for my kids to learn French properly.

- Finally, I realize I haven’t talked about The Biggest Little Farm on this blog. I saw the documentary on Mother’s Day and I absolutely loved it. It’s about Apricot Lane Farms in California. Right off the bat, I’ll tell you that I’m aware of the film’s flaws, like how cloying it seems, what with the “happy clapping music” in the trailer and the fact that it’s tapping into the zeitgeist of sustainable, ethical, small-scale farming with which foodies and hipsters seem obsessed. It seems trite or like it’s catering to a niche audience with which you don’t identify, or even manipulative, and I get that. But I’m also a biologist, so the notions and importance of biodiversity leading to self-sustaining ecosystems are rooted into me (pardon the pun). It’s beneficial not just to the environment, including the health of those who live in it (humans as well as animals), but it helps sustainability because monoculture never works out long term. (Monoculture, over time, will deplete the environment of its resources and create conditions where a single virus can take out almost an entire crop worldwide. Poor agricultural practices can also have dire repercussions, as they did during the Dust Bowl – the drought alone wasn’t enough to cause all those problems, but farming too much land with wheat made it so much worse.) So all this to say that despite how cloyingly it’s presented, these are actually my values.

I loved this movie not just for its message, but because it showed some of the behind-the-scenes of all the effort that was needed to get a farm up and running. This was seven years in the making, with a seemingly massive investment from a private source. I was curious to find out more and ended up reading this article. It doesn’t answer all my questions (like, how much money was invested? when did the farm become profitable?), but I learned that actually, 85% of the farms in California are small-scale, though Apricot Lane Farms is one of only 66 farms to be certified biodynamic. I also saw one of their job ads for farmhands and was happy to note that they pay well above minimum wage! They also now make money from giving tours (currently sold out months in advance) and selling merchandise online, in addition to farmers’ markets. I’ve got a practical side that really wants to take a look at their financials!

The Engineer had expressed enough curiosity about it once I came back from the theater that I though he wanted to see it, but it turns out that he was just trying to figure out what I saw in it, since he had the same initial distaste for it as I did from the trailer. He’ll only watch it with me if I promise to watch something I don’t want with him, and while I could agree to the general principle of the trade, I don’t want to walk into this handing him a blank check, so to speak, so I’ve shelved the DVD for now and am waiting for someone else who’ll enjoy it. It’s a wonderful movie, people! 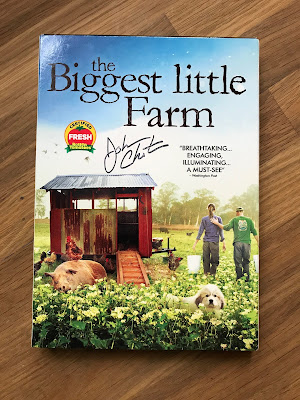