I got this recipe from the Weelicious Lunches cookbook, which I still use often. This isn’t to say that my kid eats everything in it (I don’t think he’d go anywhere near the egg pesto sandwich, despite how awesome that looks to me), but there are some great recipes in there. There’s a small chapter of recipes that are all variations on pizza, and I decided to try one. I didn’t have it in me to make the whole wheat dough, so I just bought some regular pizza dough at the store, but I did make the sauce. And it’s really cool, because it’s made from a lot of vegetables! The recipe for the sauce makes about 4 cups, so I froze three portions of 1 cup and used the remainder (¾ cup) in this recipe. This means that I have enough on hand to make more pizza recipes for future lunches, and I’d even consider doubling the amounts just to have extra to freeze! In hindsight, though, I’d portion it ¼-cup mounds to freeze it, since most recipes in the book call for multiples of ¼ cup but never 1 whole cup of sauce.

The original recipe called for shredded mozzarella, and usually my two options are to shred lactose-free cheddar instead or use a vegan mozzarella. The Little Prince is not fond of Daiya, though – I could have used regular mozzarella for him, but I wanted to taste these too! I ended up using a new-to-me brand, Violife, which I heard about here. Even though it doesn’t melt, we all agreed it tasted better than Daiya, so we’ve pretty much switched household brands.

The Little Prince loved this in his lunch!

Heat the oil in a saucepan over medium heat. Add the bell pepper, carrot, celery, onion and garlic. Sauté until veggies are soft, about 5 minutes. Add the tomato paste and cook for 1 more minute, stirring constantly.

Add the tomatoes, reduce heat to low, and simmer for 10 minutes.

Remove from heat, purée with an immersion hand blender (or in a regular blender) until almost smooth.

Return sauce to the heat and simmer until thick, 10-20 minutes. The longer you simmer this sauce the thicker and more flavorful it will become. You can simmer up to 2 hours.

Spread the pizza sauce in a thin layer across the surface of the dough. Sprinkle with the cheese and pepperoni (or your favorite topping – the original recipe called for broccoli, but I knew my kids wouldn’t go for that).

Roll up the dough lengthwise to form a 20-inch log and pinch the seam together. Slice the log into 2-inch pieces.

Place the pizza rolls in the muffin cups and pat down slightly. (The rolls are supposed to hold together on a parchment-lined baking sheet as well, but I didn’t want to risk it!) Bake for 25 minutes (20 minutes if using a baking sheet), or until golden and bubbly and the center of the dough is cooked through. Cool and serve. 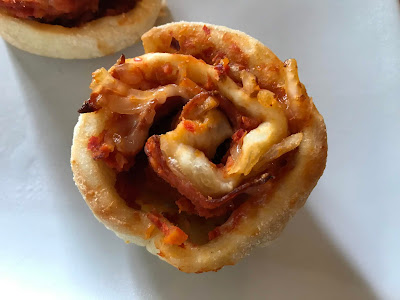