I *finally* tasted ruby chocolate! It’s being called the fourth type of chocolate, the first three being dark chocolate, milk chocolate, and white chocolate, but I don’t like that definition. White chocolate is white because of how it is made (with cocoa butter, sugar, and milk solids), whereas both milk chocolate and dark chocolate are made with cocoa solids from the cacao bean instead of just cocoa butter. So in theory, you could get beans from a single cacao tree and make the first three types of chocolate from it. As for ruby chocolate, it is made via a process similar to white chocolate, but only from a *specific* species of cacao bean that gives it its distinctive pink color. I first heard about it two years ago, but it wasn’t available for the general public at that point – now it is! 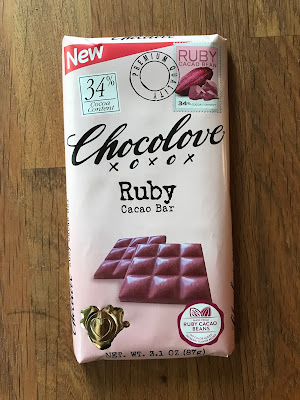 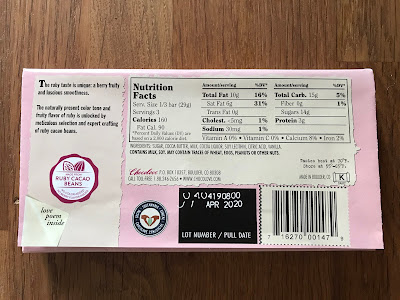 I saw this ruby chocolate bar by Chocolove at Whole Foods and just had to try one. To be clear, it’s not lactose-free, because there’s milk in it, just like in white chocolate. But I’ve only had a few squares at a time and I haven’t had any issues. It has a beautiful pink shade; the mouthfeel is smooth and basically like white chocolate. The taste is bright and has a sourness that is almost lemony; it’s definitely fruitier than regular chocolate, but the fruit taste reminds me of berries in addition to the citrus. That being said, to me, it’s a variation on white chocolate and it doesn’t push the same buttons as dark chocolate. So I wouldn’t eat it straight (after this bar, that is), but I’d definitely use it for baking. 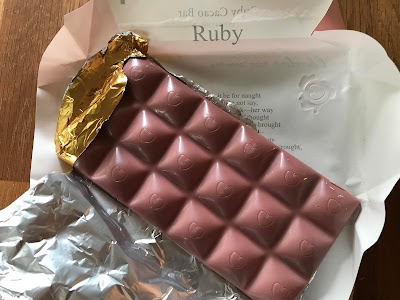 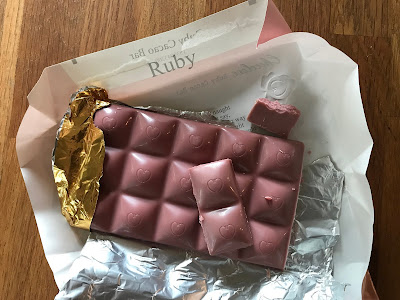 Ruby chocolate was developed by Barry-Callebaut, but that brand can be hard to find in regular grocery stores. I wonder if Aubut would carry it?