This recipe is from The Kitchn. I changed it up a bit by making hard-boiled eggs instead of soft-boiled, because I knew that would suit my family better. I also used red cabbage (leftover from this recipe) because I prefer it to bitter radicchio. I really liked this salad, and I liked that there were enough elements in it that the Little Prince found something he liked, even though that obviously wasn’t the kale! Plus, when the components are stores separately, it keeps for days. Great for lunch or dinner! This made 6 servings for us.

For the vinaigrette, I usually make something very simple with equal amounts of olive oil and vinegar (like red wine vinegar); sometimes I throw in a bit of Dijon mustard.

Mix the cheese, salt, and a few grinds of black pepper in a small bowl; set aside. Cut the bread into roughly 1-inch cubes (I made mine a little smaller).

Heat the oil in a large frying pan over medium-high heat until shimmering. Add the bread cubes, toss to coat with the oil, and arrange in a single layer. Toast the bread, tossing every minute or so, until the cubes are golden-brown on all sides, about 5 minutes total.

Remove from the heat and transfer to a large bowl. Immediately sprinkle with the cheese and pepper mixture and toss to combine. (Once cool, these will keep at room temperature in an airtight container.)

Fill a small saucepan with several inches of water and bring to a boil over high heat. Reduce the heat to a rapid simmer and gently add the eggs to the water, one at a time. Cook 6 minutes for a runny yolk. (I made mine hard-boiled, or hard-baked to be more precise: 30 minutes in a 325 °F-oven.) Remove the eggs with a slotted spoon. Run the eggs under cold water and, once cool enough to handle, gently peel.

Working in batches if needed, place the bacon in a single layer in a large frying pan. Fry over medium-low heat until the bacon is crispy on one side. Flip the bacon with tongs and fry until the second side is crispy. Transfer the bacon to a paper towel-lined large plate and repeat frying if needed. Once cool enough to handle, break the bacon into 1-inch pieces.

Place the kale and radicchio in a large bowl and toss to combine. Cover and refrigerate until ready to serve.

When ready to serve, divide the greens among 4 plates. Top with the bacon and croutons. Place 1 egg on each serving and drizzle with the vinaigrette. 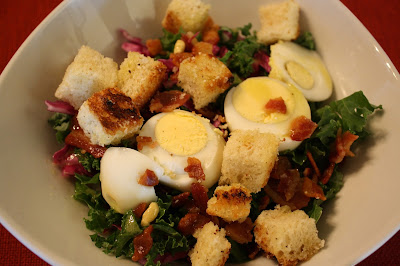