I know I’ve got similar recipes posted already, but I had to share this. The red pepper sauce isn’t creamy like in this or that recipe, as the pasta is finished off by baking, BUT the addition of (lactose-free) béchamel makes it so much richer! It’s also easy to make, as I used jarred roasted red peppers instead of making my own – the red sauce all came together in the food processor, and the dish made my life easier because the components can be made ahead and assembled before baking. This dish was fantastic! I could have pulled a Garfield and emptied the pan right then and there, but the lack of leftovers would have left me starving the next night. The Engineer agreed with me that this definitely needs to go in the rotation (as a matter of fact, I’m making it again tonight); the Little Prince was a bit less enthusiastic, but we’re working on it. I bet this would freeze well, too. The recipe is from Kitchen Konfidence.

To make the roasted red pepper sauce, combine red peppers, sun-dried tomatoes, garlic, pine nuts, Parmesan and vinegar in a food processor along with 1 teaspoon of salt and several grinds of black pepper. Pulse until ingredients are finely chopped. With the food processor running, stream in olive oil to form a smooth sauce. Season to taste with additional salt, pepper and vinegar.

To make the white sauce, warm butter in a medium saucepan over medium heat until foaming. Sprinkle flour over the surface of the butter, and then stir to combine. Cook, stirring frequently, until the mixture turns light golden and takes on a nutty aroma (1 - 2 minutes). Whisk in the milk gradually, then bring to a boil. Reduce heat to medium-low and cook, stirring occasionally, until the mixture thickens to the consistency of heavy cream (8 - 10 minutes). Take the sauce off the heat, and stir in Parmesan, nutmeg, a couple pinches of salt and a few grinds of black pepper. Season to taste with more salt and pepper.

Bring a large pot of salted water to a boil (I did this while I was cooking the white sauce). Cook the pasta until just before al dente (2 to 3 minutes shy of the package instructions). The pasta should have some good bite to it, but no crunch. Drain the pasta, but reserve a little of the cooking liquid. Return the pasta to the pot, then fold in the roasted red pepper sauce with a splash of cooking liquid. Continue folding until the pasta is well coated. Taste and season with more salt and pepper if needed.

Spoon half of the white sauce into the bottom of a 12-inch cast-iron skillet (I used a 9 x 13 baking dish). Top with 1/2 of the pasta, 1/2 of the mozzarella and 1/2 of the basil. Start the next layer with the remaining white sauce, then remaining pasta. Using a spoon or spatula, gently fold the pasta in a few spots to create some streaks of white sauce throughout (don't mix up the whole thing though). Top with remaining mozzarella, basil and dusting of grated Parmesan. (This is the point when I stored it in the fridge; I just baked it a bit longer in the next step.)

Bake until the cheese is melted and the sides start to bubble (about 20 minutes). Turn the broiler to high, put the skillet under the flame, then cook until golden spots start to develop on the cheese (3 to 4 minutes – honestly, I don’t think this step is necessary). Let sit for 5 minutes before serving. Enjoy with extra chopped basil, grated Parmesan and black pepper! 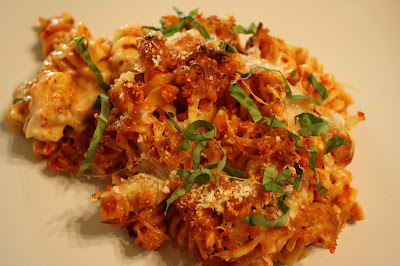