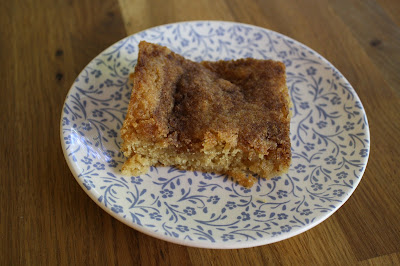 I found this gooey cinnamon cake recipe on David Lebovitz’s blog, but it was created by Deb Perelman of Smitten Kitchen, for her cookbook. It was unusual to make, as it has layers, but it came out absolutely delicious. It was moist and buttery, with a crisp top. We ploughed right through it over here, and the Little Prince in particular has brought it up at dessert time on several occasions since we’ve polished it off (it’s good for snacking, too). Note that I always use Ceylon cinnamon, but if you’re a fan of cassia, go for it.

Preheat the oven to 350 °F. Line a 9- by 13-inch cake pan with foil, leaving an overhang on all four sides. (David Lebovitz helpfully suggests overturning the pan, shaping the foil over the bottom, removing it, then flipping the pan over and easing the foil into the pan.) Spray the foil in the pan with nonstick spray or brush with melted butter or margarine.

To make the cookie base, whisk together the flour, baking powder, and salt in a small bowl. Beat the margarine and sugar in the bowl of stand mixer with the paddle attachment, or by hand, until light and fluffy, 3 to 5 minutes. Add the egg and the milk and mix in, stopping the mixer to scrape down the sides of the bowl. Stir in the dry ingredients, until fully incorporated. Put the mixture in the cake pan in dollops (it’s too thick to spread if you add it all in the same place), and spread it into an even layer with an offset spatula (I had to use my fingers for this).

To make the soft gooey layer, in a small bowl (or in the same bowl you used before, without even cleaning it), whisk together the corn syrup or golden syrup with the milk and vanilla.

Beat the margarine with the 1 cup sugar and salt until light and fluffy. Beat in the egg, scraping down the sides of the bowl.

To make the cinnamon topping, mix together the sugar and cinnamon, then sprinkle it evenly over the cake.

Bake the cake for 25-30 minutes, or until the cake feels slightly damp, but gently set in the center. Remove from oven and let cool on a wire rack. When cool, lift out the cake using the overhang of the foil, and cut the cake into 1-inch (3cm) squares (we made bigger pieces, but had only one at a time, obviously). 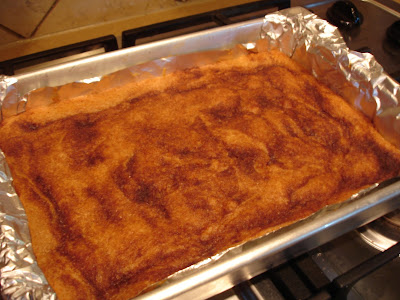 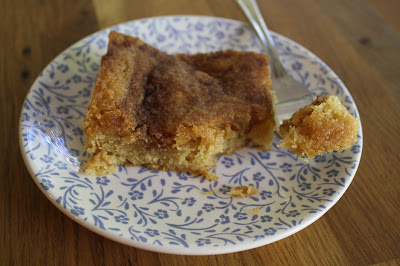