I often start writing posts and then let them languish on my hard drive without publishing them, and I think that’s what happened here. I was hoping to have another outing to add to the list, but we seem to have skipped August and might skip September as well, so there’s no point in holding off any longer.

Our June outing was a visit to Philadelphia on our way north. The road trip itself yielded a few surprises: on the first day, I tasted python (made into jerky – tastes like turkey) as well as alligator nuggets (tastes like chicken, but a bit fishier and chewier). We also had a dinner at Logan’s Roadhouse, where it turns out they have a surprisingly good house salad (I had it with grilled chicken and balsamic vinaigrette). My favorite chain, though, was still Panera Bread, where this time I tried a half strawberry poppy seed salad (with grilled chicken, mandarin oranges, blueberries and pineapple) with a half turkey avocado BLT (pictured below). Divine! We also fell for the charm of small-town Virginia: Woodstock had the best playground ever, while Radford had an unexpectedly great restaurant called River City Grill. I had the pesto primavera with chicken, and it exceeded all my expectations. 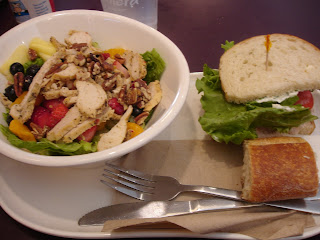 We only had a day in Philadelphia, and we got caught in the rain for part of it, so we didn’t see everything there is to see (can one ever achieve such a thing, though?). The first thing we noticed is that it takes some balls to drive in Philadelphia – traffic patterns and parking spots are insane! What I most wanted to see was the Liberty Bell, so that’s what we did first. This had been a long time coming for me, because of a failed class trip over 20 years ago (the point of which had been to see the Liberty Bell, and we ended up running out of time because a classmate whose name I’ll keep to myself forgot her jacket at a McDonald’s and we had to go back for it). We also had a cursory visit of Independence National Historical Park, across the street from the Liberty Bell. The park includes Old City Hall, Independence Hall, Congress Hall, Library Hall and Philosophical Hall. As it turns out, tickets to go into Independence Hall must be obtained at the visitor center a block away, which we only found out after having gone through security and visiting the exterior of the buildings – at that point, we didn’t want to go through all that again. We did go into Congress Hall, and we saw one of the (26 known remaining) originals of the Declaration of Independence. 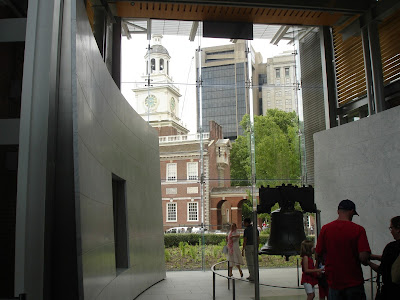 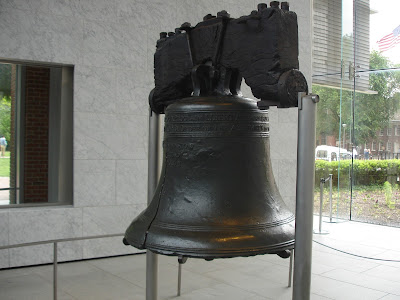 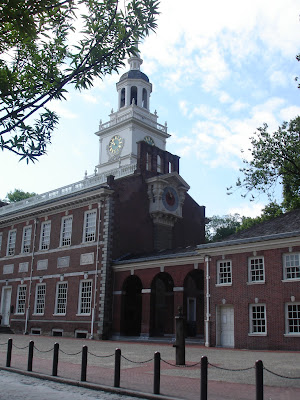 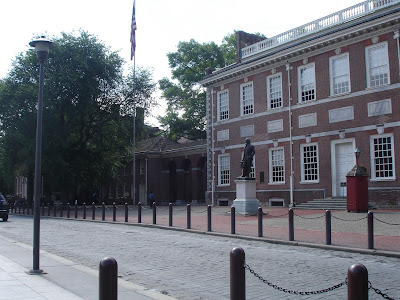 We had lunch at Rouge, which is known for its burgers. The place was slightly fancier than we would have wished (seeing as how we came in with a toddler and a stroller, all of us wet from the downpour), but the staff was very welcoming and accommodating. The burger was great, too, with caramelized onions and gruyere and very good fries (Perhaps I would make the patty flatter, but that’s another story). We also had cupcakes at Sweet Freedom Bakery, which is vegan, gluten-free and allergy-friendly. We actually tried four different cupcakes: berry, vanilla, chocolate and faux-stess. I really liked the flavor of the berry, but the chocolate was my favorite (although I only had one bite, because the Little Prince didn’t want to share it). The Engineer preferred vanilla. What is interesting is that the frostings are all different – one might be coconut cream, another might be coconut-free. From the perspective of a lactose-free cook, I find frostings to be the most challenging, so I’m pleasantly surprised that a bakery would go beyond creating one frosting recipe and adapting it. That being said, the frosting on the berry cupcakes was a bit pasty for my taste, but the others were great. 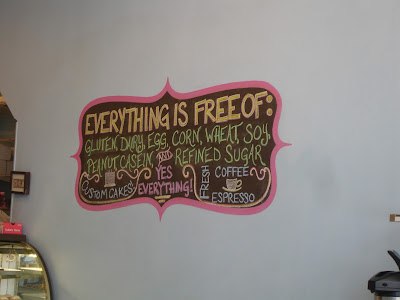 We topped it off with a quick look at the Rocky statue and the Rocky steps, at the Philadelphia Museum of Art. A good time was had by all. 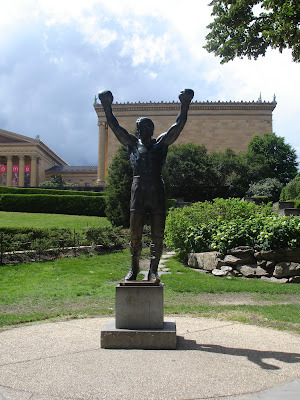 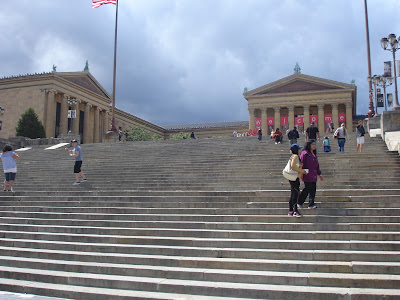 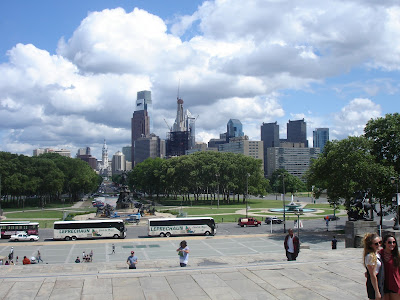 As an outing in Quebec, in July, my mother and I took the Little Prince to Miler Zoo, which is near my grandmother’s house. Basically, picture something like the Austin Zoo or Montreal’s Ecomuseum, albeit on a smaller scale. They are open from late May until (Canadian) Thanksgiving, and by appointment during the winter (though since all the wheelchair- and stroller-friendly paths are really dirt trails, they do close in case of heavy rain). All the animals there have been rescued: there are farm animals (with a pig, goats and chickens roaming free), including exotics like ostriches and llamas, as well as a zebra-donkey hybrid; there are also local wildlife specimens like deer, raccoons, lynxes, bears, and wolves, in addition to monkeys, lions, a tigress and kangaroos. I wouldn’t recommend driving all the way out there from Montreal, but if you’re in the general Quebec City area, it’s worth a day-trip! 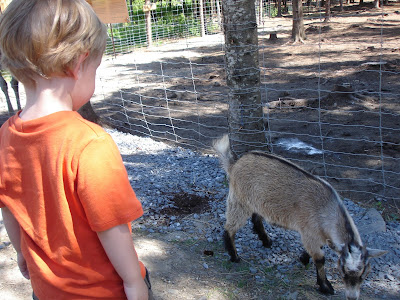 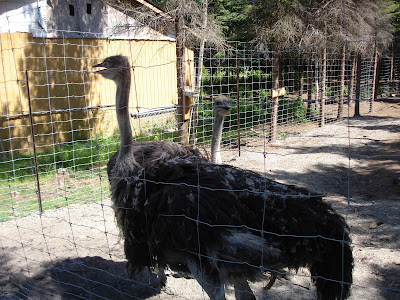 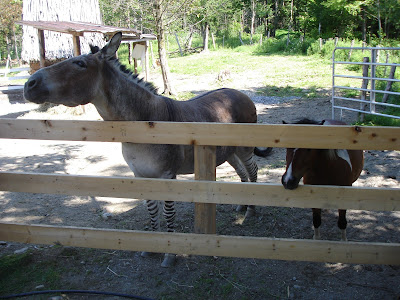 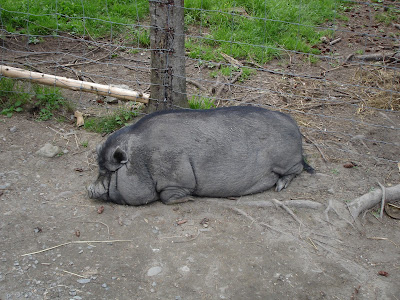 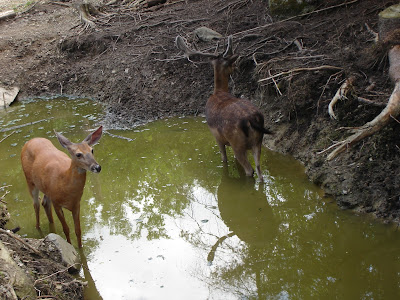 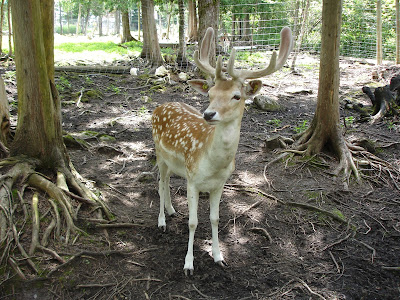 Once in Montreal, we made the time to have lunch with our friends at the reopened Zero 8 restaurant (which is now also mustard-free, so it could be called Zero 9, really). Everything was just as good as I remembered, and the place also seemed more child-friendly than I remembered (I don’t know if this was due to the new location, to eating lunch instead of dinner or to the fact that I now eat with a child). The Journal de Montréal published an article about them last month, and when they discuss crowd-funding (point 7), there’s a picture of my “brick” on the wall. :)

We also made a sort of pilgrimage to Copoli, which has relocated. This place is known for its BIG burgers (the Engineer ate one by himself, but I split one with the Little Prince, who was overjoyed with the size of things). In all seriousness, it’s not the best burgers in town, but probably some of the most impressive (I would say the same about Chris Madrid’s in San Antonio.) 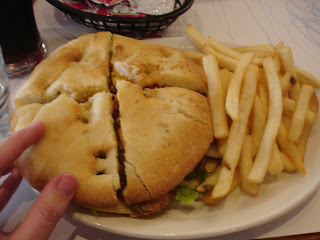 For our anniversary, the Engineer and I went to Toqué!, where we had a fantastic meal. Even for a special occasion, it’s a bit more than we like to spend, so we went for lunch instead of dinner (bonus: it’s easier to get a reservation then, too). I started with the duck tartare and then had the beef, and both were fantastic. There was no lactose-free dessert that day, so I had something with chocolate. That was one of our best meals ever, I think. We also went to Garde Manger and, although it was quite a nice meal, we felt a bit let down. I think we had preferred Beaver Hall the previous year.