I have been trying a lot of recipes with stone fruit lately, since it’s the season and all. They don’t all pan out, though (a rustic plum tart didn’t work for me, and peach and spice tea muffins, while pretty, were underwhelming). Some were good, but hard to photograph (like cherry basil soda). But then there’s Nigel Slater’s pudding cake of honey, cinnamon and plums, which I found on Orangette. I had actually tried it last year, and had a bit of a disastrous result because I didn’t weigh my plums and cut them into pieces that were too big; my batter overflowed and underbaked. That being said, it was still good enough that I wanted to try it again, especially considering that I had bought golden syrup specifically for it – but then plum season abruptly stopped, so I had to wait until this year. Spoiler: it was worth it! It was an absolute success the second time around.

This cake is a heavy, dark, moist cake that calls for three kinds of sweetener. This may seem like a lot at first glance, but the tastes are very balanced and I’d urge you not to change anything here. (The exception would be if you run out of honey or golden syrup, then you can substitute one for the other, or even use corn syrup as it has the same consistency – though try not to use corn syrup instead of one of these, since it is less flavorful; just use it to make up the difference IF needed). I made this cake in an 8-inch square pan, and although that works well, it makes for somewhat awkward slices (the slice I showed here was much thinner, but prettier, than the thicker slices I actually served). It might look better in a round pan. I’ve fixed below the vocabulary that had misled me in my first attempt, and I do urge you to weigh your plums instead of just counting them (I went slightly under the weight to avoid any spillage). I also leave you with the following note, from Orangette’s Molly Wizenberg: “This cake keeps beautifully at room temperature, and because it’s so incredibly moist, it’s actually best not to cover it too tightly, or else it can get gummy. So long as you eat it within 2 or 3 days, a piece of wax paper pressed against the [surface] is all you really need.”

Preheat the oven to 350 °F. Grease an 8- or 9-inch square baking dish, and line it with parchment paper, leaving a bit of overhang to lift out the cake later. There’s no need to grease the parchment.

In a saucepan, warm the golden syrup, honey, and butter over medium-low heat, stirring occasionally. When the butter is melted, stir in the brown or muscovado sugar. Remove the pan from the heat, and set aside to cool for a minute or two.

Break the eggs into a medium bowl, add the milk, and whisk to mix.

Pour the golden syrup mixture into the flour mixture, and stir with a sturdy spoon until just combined. The batter will be very thick at this point. Pour in the egg mixture, and continue to stir – it will resist incorporation and look weird at first – until you have a loose, almost sloppy batter without any traces of flour.

Pour the batter into the prepared pan, and then arrange the plums on top. (They will sink.) Bake for 35 minutes; then place a piece of foil loosely over the top of the cake, and cook for 10 to 15 minutes more. The cake should look mostly set at this point, but it might still look the slightest bit soft in the center. That’s okay. Remove the piece of foil, turn off the oven, and leave the cake in there for another 15 minutes. Remove from the oven and transfer to a rack. Cool for 20 minutes, then loosen the cake from the pan and lift it out onto the rack. Cool completely before slicing. 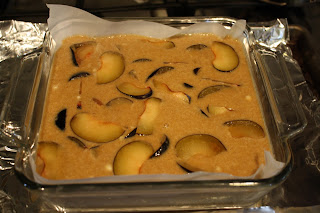 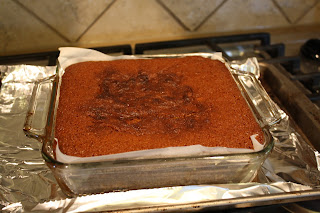 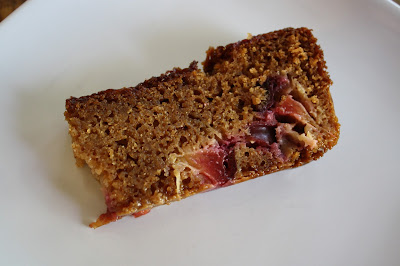