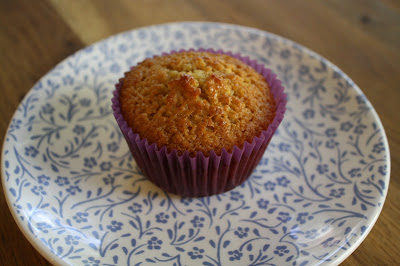 I found this recipe on David Lebovitz’s blog, where they were called simply olive oil muffins – that being said, the orange was prominent enough that I’ve decided to name it in the title. The yield was supposed to be 8 muffins, but he used non-standard muffin molds, so that may have thrown things off a bit… I used a standard muffin pan and got 14 muffins (I could have made just 12, but I didn’t want to fill the molds any more than I already had, and it seemed a shame to waste batter). As a result, I baked mine for less time, which worked out perfectly, and the instructions I’m giving you below are what worked for me. These muffins were fantastic! When they were fresh, the top was crisp, the crumb was moist, and the Engineer and I both thought they were the best thing ever. On subsequent days, the tops weren’t as crisp, but the crumb was still moist and possibly more flavorful. I managed to stash 3 in the freezer out of principle, but you may not get around to that! (For the record, the Grand Marnier here does play an important role in the flavor, but I would not say that these were “boozy” in any way. You might want to try another citrus-flavored alcohol like Triple Sec if that’s what you have on hand, or as the original recipe suggests, go in a different direction and add orange marmalade instead. But personally, I would make them exactly that way again next time.)

Preheat the oven to 350 °F. Line a standard muffin pan with paper liners (see note above).

In a large bowl, whisk together the flour, sugar, salt, baking powder and baking soda.

Make a well in the center of the dry ingredients and pour in the olive oil mixture. Stir the ingredients together with a flexible spatula until they are just combined but do not overmix. There may be some minor lumps in the batter, which are fine.

Fill the muffin molds 2/3 to 3/4 full of batter and bake until they just feel set in the center and the tops are golden brown, about 25 minutes. Remove from oven and let cool a bit before serving. 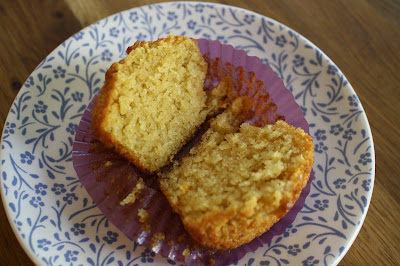