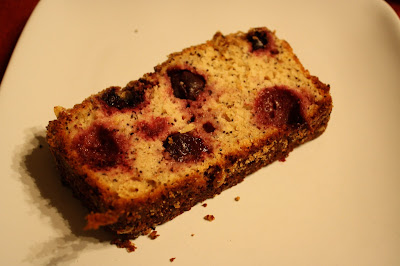 This isn’t exactly seasonal, because I didn’t use fresh cherries. I could have, at the tail end of the season, but then I thought of how much easier it would be to use frozen cherries instead of having to pit all those cherries myself, and laziness won out. This means I had to increase the baking time, however, but I knew that going in. The Engineer and I both really enjoyed it, but the Little Prince has somehow decided that the only thing that can replace his peanut butter toast in the morning is pancakes, so no dice with him. The recipe is from David Lebovitz’s blog.

Make the streusel by mixing the ¼ cup flour, oats, brown sugar, poppy seeds, cinnamon or cardamom and salt in a small bowl. Add the butter and use your fingers to break the butter into small pieces, until the streusel is in small bits. Set aside.

To make the cake, whisk the flour, baking powder, poppy seeds and salt together in a small bowl.

In a large bowl, rub the sugar and lemon zest together very well with your fingers, encouraging the lemon oil to saturate the sugar. Whisk in the oil, eggs, yogurt and lemon juice. Add the flour mixture all at once, stirring with a rubber spatula until it’s almost completely incorporated. Fold in half of the cherries and scrape the batter into the prepared pan.

Dot the remaining cherries over the top and sprinkle with streusel. Bake the cake until golden brown on top and it feels set in the center, about 45 to 50 minutes. (Since I used frozen cherries, mine took closer to 75 minutes. Just insert a toothpick in the center to check for doneness.)

Let the cake cool on a wire rack. When cool, run a knife along the outside of the cake to help it release from the pan and tip the cake out of the pan. 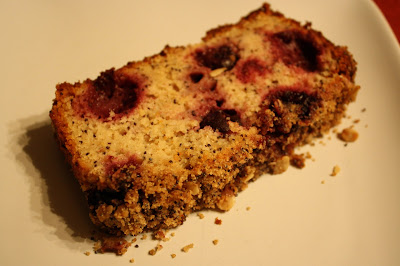