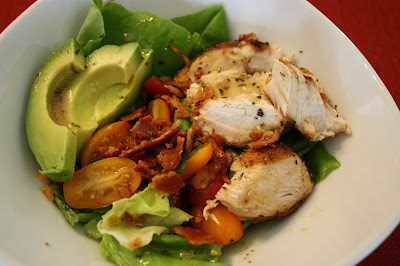 This salad is unbelievably flavorful! The chicken is cooked in bacon grease, which obviously helps a lot, but the rosemary is also a wonderful addition, not to mention the dressing. This was a big hit in our house (even the Little Prince, who did not care for all the elements of the salad, found enough in there to keep him happy). I found the recipe on How Sweet It Is. The proportions below have been doubled from the original recipe, because I wanted leftovers; as always, I only sliced the avocado when I was ready to serve it.

Heat a large skillet over medium-low heat and add the bacon. Cook until it's crispy and the fat is rendered. Remove the bacon and place it on a paper towel to drain any excess grease.

Season the chicken with salt and pepper. Cover with the rosemary. In the same skillet used in the previous step, over medium-high heat, add the chicken and cook until golden and crisp on both sides, about 5 to 6 minutes per side (make sure it is cooked through). Remove the chicken and let sit for a moment while you assemble the salad, then slice it.

Toss the greens with the watercress and the tomatoes. Top with the sliced chicken, the bacon and the avocado.

Whisk together all the ingredients for vinaigrette (I like to shake everything together in a small jar).

Drizzle the salad with the rosemary vinaigrette! 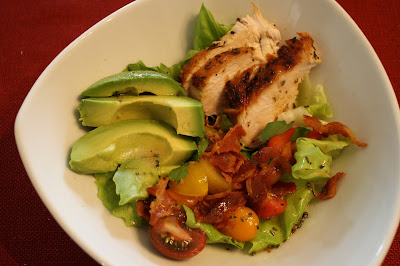