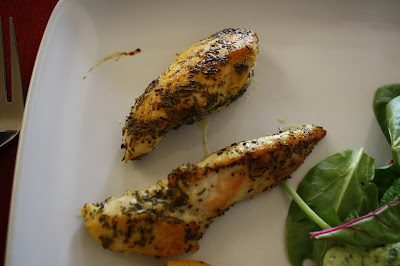 I found this recipe in the National Post; it’s from a Persian cookbook by Sabrina Ghayour, though she concedes that rosemary isn’t typical of the region. I dialed it back a lot, because the original recipe called for a whopping 40 grams of rosemary leaves (almost a full cup!). I felt like I was already using a lot, and when I weighed it, it came in at just 5 grams. Honestly, any more than that and you couldn’t even taste the saffron – and since saffron is not only delicious, but also expensive, I feel like it needs to be showcased in a dish, or else it’s a waste. So I used 5 grams of rosemary below, and be warned that any more would completely overpower the saffron; you could even use a bit less rosemary if you wanted. That being said, the dish was absolutely delicious! I’d definitely make it again. I served it with roasted potatoes (improvised with cumin, paprika, ground ginger, garlic powder, salt, pepper and olive oil, a spur-of-the-moment mix which was fantastic!) and a salad with creamy green dressing.

Grind the saffron with a spice grinder or mortar and pestle, then pour over it the boiling water and let it stand for 20 minutes or until the water has cooled and turned red.

Combine in a bowl the oil, rosemary, salt, pepper and the saffron water. Add chicken, mixing so the meat is evenly coated with the marinade. Cover and refrigerate for one hour or overnight.

Heat a large frying pan over medium-high heat and drizzle with a little oil, tipping the pan to evenly coat the bottom with oil. Drain chicken and dry with paper towels, being careful not to remove the seasonings (I just let the chicken drip off over the dish and called it good enough). Fry chicken strips for three to four minutes a side until a golden-brown crust forms and the meat is cooked through. Fry in batches, adding more oil as required and keeping the cooked strips warm on a heated platter. Serve hot. 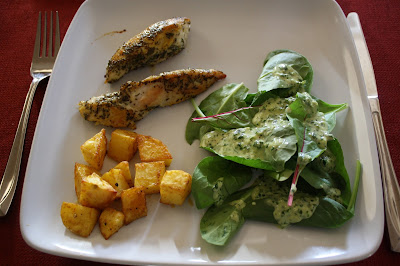 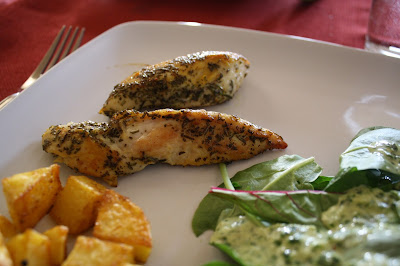