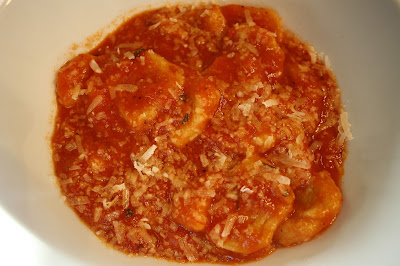 I had so many recipes of squash pasta that I didn’t want to go through another fall without trying any, especially now that I have a potato ricer. So I looked at all of them and narrowed down my list to two: pumpkin ravioli and butternut squash gnocchi. Both were meant to be served with a brown butter sage sauce, but I had to change that up a bit. See, I liked the pumpkin ravioli recipe because it’s a “cheater” recipe that called for using wonton wrappers instead of making your own pasta – I was grateful for the shortcut! I made the recipe as directed and took Lactaid for the brown butter. However, it turns out that both the Little Prince and the Engineer dislike sage (the Engineer swears his tastes didn’t change, but I was convinced he simply disliked an overabundance of sage, not the herb itself; and obviously, I’m interpreting in the case of the Little Prince, but since he likes pumpkin and there’s nothing to dislike about brown butter when you can digest lactose, that’s got to be it). So I was the only one who liked these, though I would keep the method in mind to make other kinds of pasta, especially seeing that I have leftover wonton wrappers in the freezer. 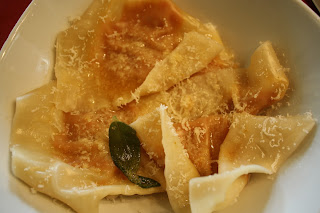 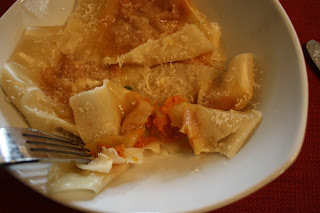 For the gnocchi, then, I wanted a different sauce. I compared my recipe (from Bon Appétit) to one bookmarked on Cooking Stoned and a vegan one on Good Housekeeping. The first really broke down the process for me, while the second made me settle on a tomato sauce and parmesan to accompany my gnocchi, which has the bonus of being lactose-free. However, while the gnocchi were better received than the ravioli, I’m still not sure anyone was big on them. If I make them again, I will reduce the amount of nutmeg to 1 teaspoon, because I felt like the taste was too strong (but then again, it wasn’t competing against sage and brown butter!). The recipe below is as it appeared in the magazine, so keep in mind that brown butter does have lactose in it. You can use another sauce, but a lighter sauce is usually best with gnocchi (so a thin marinara might work, but bolognese or a cream sauce would be too heavy).

Preheat oven to 400 °F. Cut squash lengthwise in half; discard seeds. Place squash halves, cut side up, on baking sheet and brush with oil. Roast until squash is very tender when pierced with skewer and browned in spots, about 1 ½ hours. Cool slightly. Scoop flesh from squash into processor; purée until smooth. Transfer to medium saucepan; stir constantly over medium heat until juices evaporate and puree thickens, about 5 minutes. Cool. Measure 1 cup (packed) squash puree (reserve remaining squash for another use; I put mine in the freezer).

Meanwhile, cook potato in medium saucepan of boiling salted water until very tender, about 20 minutes. Drain. While potato is warm, press through potato ricer into medium bowl; cool completely. Measure 2 cups (loosely packed) riced potato (reserve remaining potato for another use; I think I ate mine).

Line 2 large rimmed baking sheets with parchment. Sprinkle parchment lightly with flour. Working with 1 dough piece at a time, roll dough out on floured surface to about ½-inch-thick rope. Cut rope crosswise into ¾-inch pieces. Working with 1 piece at a time, roll gnocchi along back of fork tines dipped in flour, making ridges on 1 side. Transfer gnocchi to baking sheets. Repeat with remaining dough. Cover loosely with plastic wrap and chill at least 1 hour (or up to 6 hours).

Working in 2 batches, cook gnocchi in large pot of boiling salted water until very tender, 15 to 17 minutes (gnocchi will float to surface but may come to surface before being fully cooked). Using slotted spoon, transfer gnocchi to same parchment-lined baking sheets. Cool. (The gnocchi can be made ahead to this step; cover loosely and chill for up to 8 hours.)

Cook butter in heavy large skillet over medium heat just until golden, stirring often, 3 to 4 minutes. Add sage; stir 1 minute. Add gnocchi; cook until heated through and coated with butter, 5 to 7 minutes. Season with salt and pepper. Transfer to bowl. Sprinkle with ¼ cup parmesan. Serve with additional parmesan, to taste. 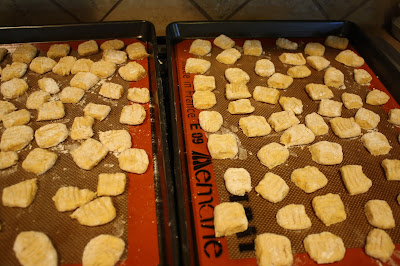 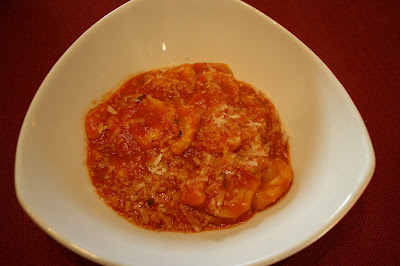