I wanted some sort of comfort food, but the recipes I was trying didn’t satisfy me. Everything cookies spread way too thin to be enjoyable, even though the dough tasted good. Flourless chocolate chip chickpea blondies with sea salt were underwhelming. Cantaloupe sorbet was a bust. I decided I wanted chocolate, so I turned to chocolate pudding. Now, I know I’ve made chocolate pudding on many occasions before, which means I must have a recipe for it. But try as I might, I could not find it! The only recipes I had made in the past few years seemed to be vegan (tofu, avocado, etc.), but I couldn’t find a “regular” chocolate pudding, with eggs and dairy. So I made one from Alice Medrich’s Pure Dessert. It included a final step of putting the pudding in the food processor for 30 seconds, which “adds a silken dimension and lightness to the texture.” I followed the recipe, but ended up with something too liquid for my liking. 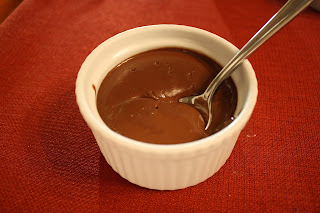 The directions were more in terms of time (i.e., stir over heat for x minutes) instead of consistency (i.e., stir over heat until mixture thickens), and I think that’s where the problem originated. The pudding was good enough that I wanted another go at it, though, so I made it again and used a bit more cornstarch, less sugar, and left the pudding over the heat longer (and I skipped the food processor step). If anything, it was perhaps a little too solid! But it was easier to eat that way (especially for my toddler), and the Engineer approved, so this is henceforth my chocolate pudding recipe, adapted from Alice Medrich.

In a medium bowl, whisk the eggs thoroughly.

In a medium heavy saucepan, mix the sugar, cocoa, cornstarch, and salt. Pour about 1/3 cup of the milk into the pan and whisk to make a smooth paste. Whisk in the remaining milk. Heat the milk mixture over medium heat, stirring, until it begins to bubble around the edges. Adjust the heat to maintain a steady simmer and stir constantly for about 2 minutes, sweeping the bottom and sides of the pan constantly to avoid scorching. Remove from the heat.

Ladle about 1 cup of the hot mixture over the eggs gradually, whisking constantly to prevent scrambling. Scrape the egg mixture back into the pan and whisk vigorously to blend. Set the pan over low-medium heat and whisk until the mixture starts to thicken (it will thicken further as it cools). Off the heat, add the vanilla and chocolate and whisk until the chocolate is melted.

Divide the pudding among 6 ramekins or pudding cups. Let cool and serve, or chill before serving. (I chilled mine, because the Engineer is adamant that chocolate pudding needs to be chilled – expect the pudding to thicken further in the fridge.) 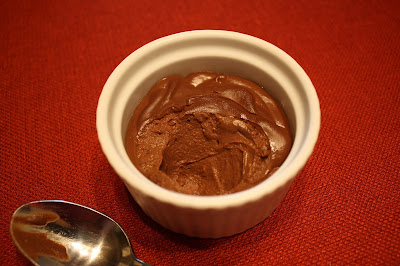