It’s funny how this meal came together. I was completely uninspired when making the menu for that week, so I asked the Engineer what he would feel like eating, and he said meatloaf. So I immediately thought of my grandmother’s recipe, and when I couldn’t find it easily by flipping through my notebooks, I decided to make my mother-in-law’s sweet-and-sour meatballs instead, because they taste very similar. To my astonishment, I hadn’t blogged about them yet, so I pulled out Second Helpings, Please! from which it is taken (again, easier than flipping through my notebooks, and it was a lazy evening). I found the sweet-and-sour meatball recipe on page 46, and the ingredients were familiar. I settled on Bon Appétit’s salt-and-vinegar potatoes as a side, just to go full-throttle on flavors. And once I had made everything, I was forced to admit that this meatball recipe, while delicious, is not the one my mother-in-law makes. Her meatballs float in an orange sauce, and they taste like my grandmother’s meatloaf (which I realize is not helpful to 99% of you, but take my word for it). The meatballs I made this time, though, were definitely more tomato-y than sweet or sour, and the sauce was unmistakably red. In any event, we all liked the meal very much. The first evening, the Little Prince was all about the potatoes and wouldn’t touch the meatballs, but the second evening, it was the opposite. He wouldn’t even have one bite of potato, but ate meatball after meatball, and same thing at lunch. I’ll be making these again! He liked them so much that that is actually why I’m blogging about the meatballs, in addition to the potatoes. (Also note that I’m using the vegan and gluten-free tags because of the side, not the meatballs, obviously.)

Combine potatoes, 1 cup vinegar, and 1 Tbsp. kosher salt in a medium saucepan; add water to cover by 1”. Bring to a boil, reduce heat, and simmer until potatoes are tender, 20 to 25 minutes; drain and pat dry. 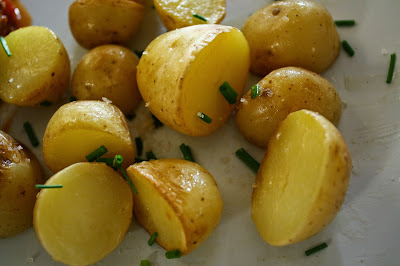 Combine minced meat, breadcrumbs, eggs, salt, pepper, and ¼ cup sugar and mix well (though over-mixing might result in tougher meatballs). Make tiny balls. Combine the rest of the ingredients in a saucepan and bring to a boil. Drop meatballs in boiling sauce and cook for 2 to 2 ½ hours (I brought the pan to a simmer). 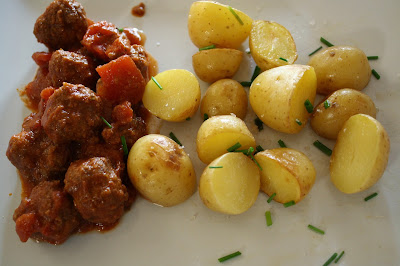