In the past few weeks, I made a few dessert recipes using maraschino cherries and cherry preserves, to check a few things off my to-make list while keeping a theme going. I had eschewed maraschino cherries over the past several years, because of all the artificial crap they contain. The Engineer, however, brought home a new-to-me brand, Cherry Man Farm to Market Maraschinos, which do not contain high-fructose corn syrup and only use vegetable juice for color (but they’re still a really bright red). They are widely available, too, though if you don’t mind looking a bit, there are other brands worth seeking out. I liked them and might start using them to make myself Shirley Temples again, for old time’s sake! 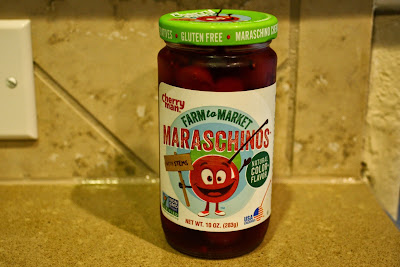 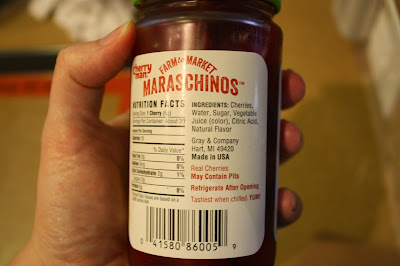 The two recipes that I tried with them were white chocolate and cherry shortbread and cherry dark chocolate kisses. In both cases, I used red gel food coloring for the dough. I’m not showing any pictures of the shortbread, because it really looked like salami, but the second kisses turned out pretty enough. However, I felt that neither was good enough to make again. 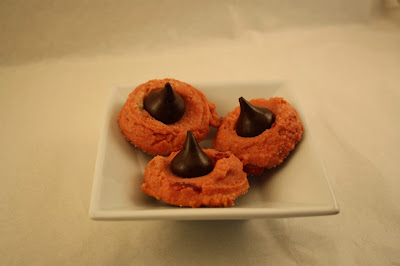 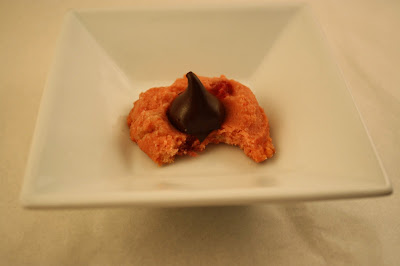 It was the cherry preserves that really did it for me. I started with Nutella cherry hand pies (with an off-brand chocolate spread, and of course you can make your own lactose-free spread). I used store-bought dough to save time, but your favorite dough recipe would be fine here. Note that I wouldn’t bother with the glaze next time, but if I did, I would make it thicker by using less water.

Preheat oven to 350 °F. Let both pie crusts sit out at room temperature for 15 minutes.

Unroll crusts and cut out circles. (I used a glass that was the size I wanted.) Reroll dough and cut out more circles.

Transfer half of the circles to a greased cookie sheet.

Spread about 1 tsp. of Nutella on the pie crust circles that are on the cookie sheet. Do not spread all the way to the edges.

Top Nutella with 1 tsp. cherry preserves. Feel free to add a little extra filling, but don't go overboard or the pies will burst while cooking.

Make an egg wash by using a fork to mix the egg with 1 tsp. water until combined. Brush inside edges of the circles with the egg wash. Top the filled crusts with the remaining pie crust circles. (You can use a small shape cutter to decorate these.) Use a fork to crimp and seal the edges. Brush the top of each pie with egg wash.

Bake for 10-13 minutes or until golden brown. Allow pies to cool for at least 5 minutes before glazing.

Add the hot water to the powdered sugar 1 tsp. at a time and mix with fork, until desired consistency is reached. Drizzle glaze over hand pies. 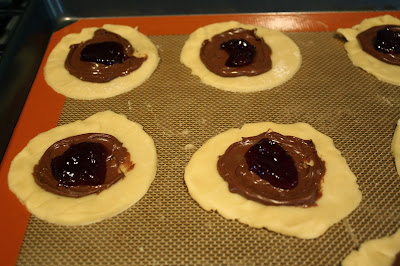 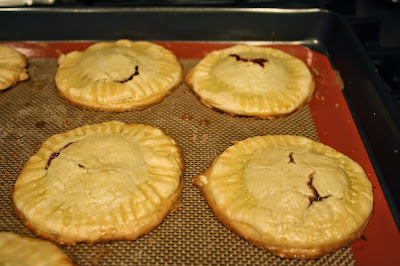 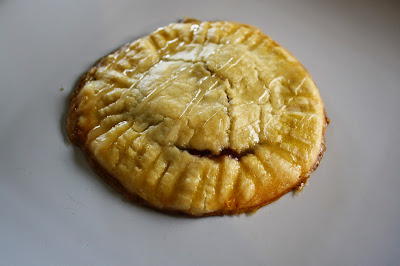 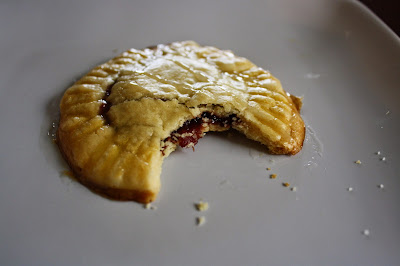 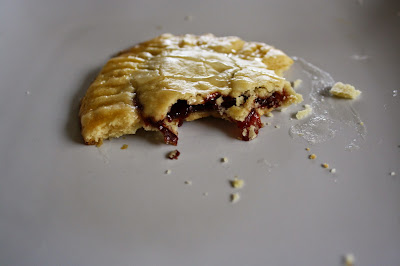 The other recipe I made with cherry preserves was these delicious vegan cherry cupcakes. I had assumed that they would be a riff on Black Forest cupcakes, but I was wrong. The cake part is just chocolate, though it is incredibly moist and flavorful; it’s the frosting that is cherry-flavored, thanks to the preserves. I absolutely loved this flavor, and the Engineer agreed. I ended up with too much frosting, though, and it was too good to throw away, so I ended up freezing the leftovers – I’ll let you know if that was a good idea once I use it on something else! To garnish, I used the afore-mentioned maraschino cherries.

In a big bowl, whisk together flour, sugar, cocoa, baking soda, and salt.

In another bowl, mix together vegetable oil, vinegar, vanilla, and water.

Whisk the wet ingredients into dry. Whisk until everything is combined. This batter is really runny.

Put the batter into the muffin tin lined (reminder: I like to use an ice cream scoop for this, as it is relatively mess-free). Bake for 20 to 25 minutes, until a toothpick inserted in the center of the cupcakes comes out clean. Let cool completely before frosting.

To make the frosting, cream together the margarine and powdered sugar. Add the cherry preserves, vanilla, and almond extracts. Beat until light and creamy. Add almond milk as needed to get the right consistency.

Frost and garnish with a cherry. 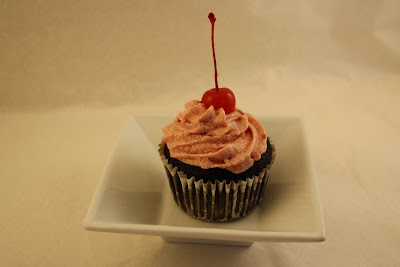 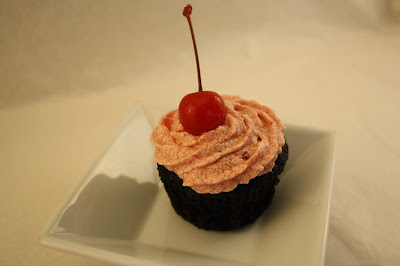 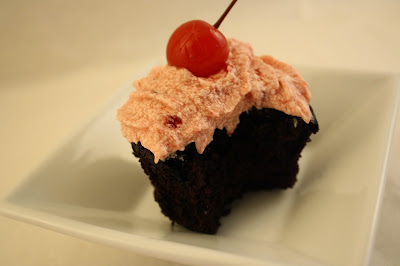