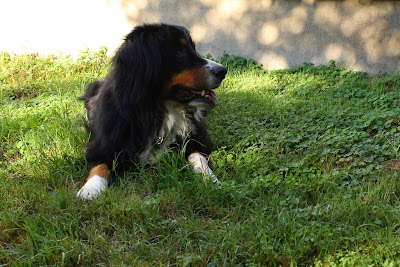 A month and a half ago, I thought that our dog (who was recovering from surgery on his lower jaw) would be fine. But in late August, we realized that the wound wasn’t healing properly. A tissue analysis revealed, on September 4th, that it was cancer, most probably fibrosarcoma. A subsequent visit with an oncologist confirmed that even IF surgery were possible (to remove roughly ¾ of Darwin’s lower jaw), this would only prolong his life by about 12 months, and it’s rough recovering from that kind of surgery. There was no guarantee he’d learn how to eat by himself again, and obviously he wouldn’t have been able to play fetch or anything like that. So because there was no way to “cure” him or give him a decent lifespan, and his quality of life was compromised, we decided that the most humane thing to do was to wait it out, with pain meds and anti-inflammatories and antibiotics to make him more comfortable, until the time came that euthanasia was best. Darwin got treats daily and lots of visits to the dog park and doggie day care (his favorite activity was playing with other dogs). In a month, his tumor went from marble-sized to tennis-ball-sized, and it became bad enough that it was time. He passed away last Saturday, October 4th, peacefully. A wise friend of mine, who happens to be a veterinarian (and who was also consulted via email about Darwin’s condition) said that this is always a difficult decision, and that no matter what moment the owners choose to euthanize their pet, it will always seem like both too early and too late. We are of course saddened to have lost such a wonderful dog, especially one only 4.5 years old, but at the same time, we know how lucky we were to have him in our lives.

While we obviously profoundly miss Darwin, and I definitely get emotional when I let myself think about him, I notice his absence more at certain times of the day. Like when the Little Prince inquires as to his whereabouts (“Da! Oof, oof!”). Like after lunch, when Darwin is no longer there to clean up the floor underneath the high chair. Like when the Engineer comes home from work and the pitter-patter of little hands and knees is his only boisterous greeting committee, with nary a wagging tail or lolling tongue in sight. It’s so quiet those times. I’m considering getting a recording of a dog shaking himself and making his tags jingle, just to keep hearing that sound periodically! I admit I almost dread the next thunderstorm, when for once we will not have a dog trying to hide in the bathtub or the closet or behind our bed’s headboard (as annoying as that always was). We will most probably get another dog eventually, but not for a while. The silver lining is that next time we make our annual pilgrimage up to Canada, we’ll be able to make more stops on the way to visit places and *gasp!* eat lunch in sit-down restaurants. Also, I’ll no longer have tumbleweeds of dog hair lurking on the floor at the back of the pantry. It’s the little things I miss most often, and it’s fitting that it’s also the little things I can make myself look forward to.