I made two more recipes from the Weelicious cookbook. There were the enchiladas, which I made with some grated cheddar substitute by Go Veggie. The recipe itself was good, and very easy, though I didn’t like it because of the sauce I had picked. The recipe calls for canned enchilada sauce, so I used our store brand’s enchilada sauce, specifically labelled “mild”. Not only was the taste odd, but it was most definitely NOT mild. It was quite spicy, actually! The Engineer enjoyed that level of spice, but was a little afraid of what “medium” would be on that scale; I couldn’t enjoy the food, and the Little Prince physically could not eat it. Next time, I’ll just make my own enchilada sauce – how complicated can it be? 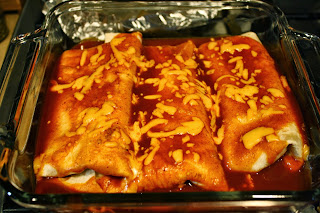 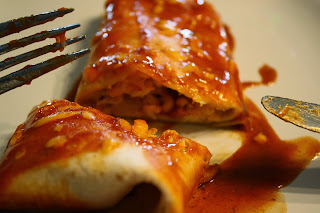 I also tried the Mexican lasagna, which is basically tortillas instead of pasta and salsa instead of tomato sauce. It was really good, albeit homely-looking. Perhaps I’d use wheat flour tortillas next time instead of corn flour tortillas (what can I say, I’m a gringa). I made this dish with Go Veggie’s grated cheddar and Monterey Jack mix, and I couldn’t even tell it wasn’t cheese! This is an easy dish that works well for a busy family.

[Note that in both recipes, the grated cheese substitute that I used was Go Veggie brand, and it was sent to me for free by the company. More on that in a later post.]

Place the quartered tortillas on an oil sprayed baking sheet, then spray the tops with additional oil. Bake for 5 minutes, remove and set aside.

Arrange half of the par-baked tortillas on the bottom of an oil-sprayed 7×11 baking dish. Layer half the chicken mixture on top of the tortillas, then layer 1 cup of the cheese blend on top.

Continue to layer the rest of the tortillas on top, followed by the remaining chicken mixture and cheese.

Bake uncovered for 35 minutes and serve. 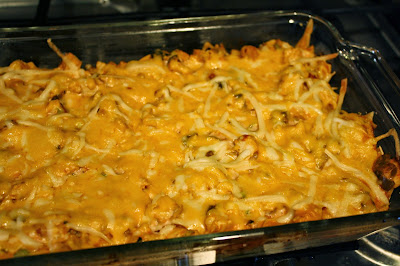 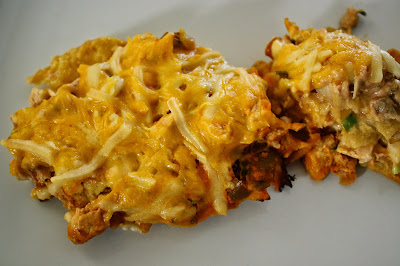