And here we are, a post about this year’s edition of SummerFest to wrap up our Canadian vacation. For those of you who have been following this blog long enough, you’ll know we do this every summer (though the Engineer and I were unable to attend last summer because of the Little Prince’s impending arrival). SummerFest (also referred to as SomewhereFest, since the location now varies each year) is an occasion when our group of friends gets together for several days (up to a week) of games, food and spirited debates. Our friend Jen had done all the legwork for accommodations and found a lovely lakeside cottage in Saint-Calixte, right by a lake, with a hot tub and grill and everything. We actually had more cookies than board games this year, which is really saying a lot! 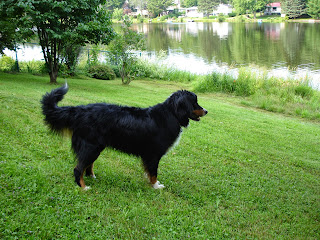 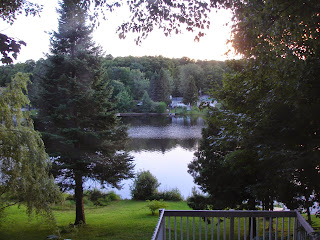 There were two dishes that really stood out for me this year, Jen’s lentil salad and shepherd’s pie (recipes to come). The meal that I tend to prefer, though, is the chicken and roasted vegetables (formerly turkey and roasted vegetables), perhaps because that’s the one everyone can attend, including people driving in from Montreal for the day but unable to stay overnight. This time, Pascal grilled spatchcocked chickens on the barbecue (because really, it’s just so much fun to say “spatchcock”!). We roasted beets, carrots and sweet potatoes, plus potatoes in a separate tray, and there was salad and homemade rolls. 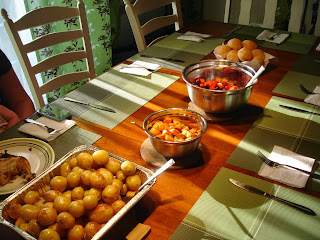 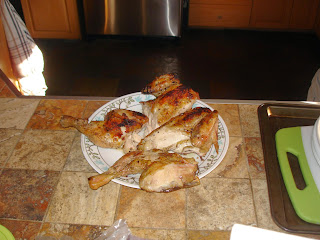 There was a fabulous ice cream bar, courtesy of Jen: she made not only lactose-free vanilla ice cream, but also hot fudge sauce, magic shell, marshmallow sauce, caramel, and strawberry syrup. And we had sprinkles! My modest contribution to that spread was waffle bowls. 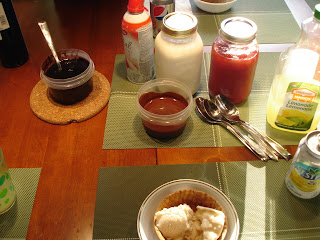 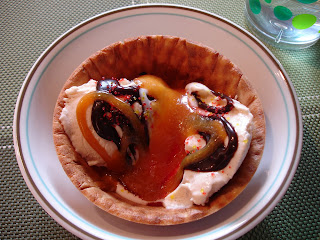 New this year: Jen gave me a crash-course in cake decorating with her Wilton tips and a few instructional videos. This came in handy the following week when making cupcakes and a cake for the Little Prince’s first birthday (I made yellow cake with chocolate-caramel frosting, and my mother also made him the traditional almond cake with mocha frosting and whipped cream). Below are some of my practice creations, along with our frosted desserts (all vegan!). I’ve decided I’m going to buy some proper piping tips. 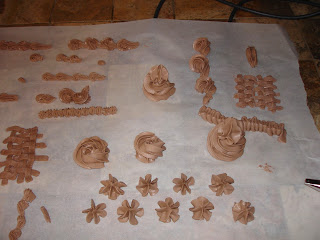 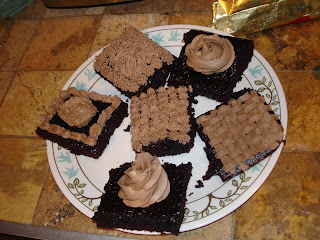 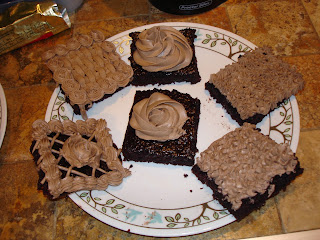 And of course, we had another cookie taste-off. To my embarrassment, I can’t find any mention of the one from SummerFest 2012, in the Eastern Townships… The only reference to a chocolate-chip cookie taste-off I see on my blog is this one, and that same 36-hour cookie had been crowned champion at SummerFest 2012.This year, we pitted three recipes against one another, and I also made curry chocolate chip cookies just for fun, though they weren’t part of the running.
First, a quick word about those curry cookies: I stick to mild curry, but even then, these cookies had a bit more bite than expected, so next time I’d consider reducing the amount of curry a bit. That being said, I really enjoyed them! The recipe makes about 18 cookies, so they’re a good novelty item if you’re afraid of the commitment. For what it’s worth, the 3-year-old present liked them. 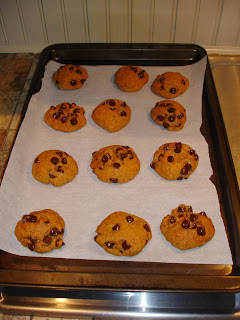 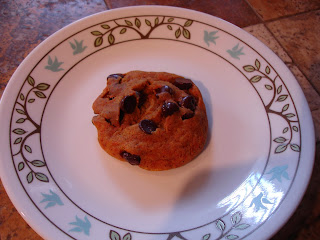 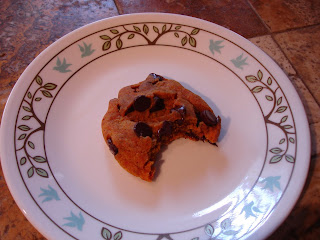 As for the three recipes in the taste-off, they were the returning champion (see the recipe for the 36-hour cookie here), new butterscotch pudding triple chip cookies from Two Peas & Their Pod, and J. Kenji López-Alt’s best chocolate chip cookies (and you know when he says they’re the best, he means it). The latter are made with browned butter, so I knew they would be good! It should be noted that I made the 36-hour cookies with margarine, though, so perhaps that put them at a slight disadvantage compared to the butter ones. It’s just that I can’t brown margarine the same way, so it was only fair that I use real butter for Kenji’s, especially considering how much effort he puts into recipe-developing; had I made the 36-hour cookies after that, I would have used butter as well, but by the time I tackled Kenji’s recipe, the margarine 36-hour dough was already in the freezer.

Kenji’s cookies were more complex than the 36-hour ones, surely thanks to the browned butter. That being said, there was less of a difference than I expected, so I think that again, if I had made the 36-hour cookies with butter instead of margarine, they would have been even harder to tell apart. Kenji’s cookies also had a lower chocolate-to-dough ratio compared to the 36-hour ones. As for the butterscotch cookies, they reminded me a bit of Felix & Norton cookies, in a pleasant way. I’ll give you everyone’s impressions below, but I want to first mention that it turns out everyone prefers their cookies when they are sprinkled with salt. I hadn’t added it in the first batch I baked, because I was afraid that it might be an acquired taste, but now I think it’s pretty universal. Go for it! The tasting results were very close, so it might depend on personal taste more than on a formula, but nonetheless, the 36-hour cookies came out with a slight lead! Plus, they’re the ones that disappeared first. 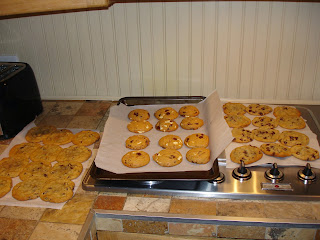 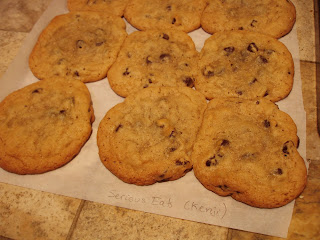 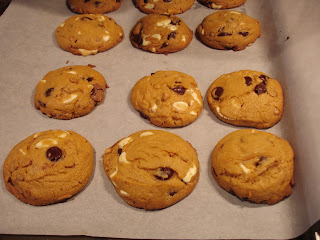 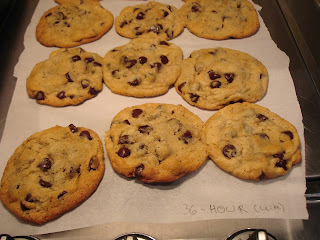 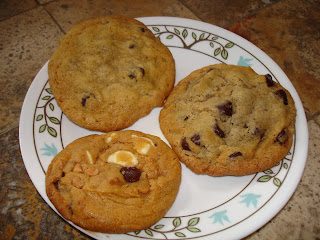 Preheat oven to 350 °F. Line a baking sheet with parchment paper or a Silpat baking mat and set aside.

Drop cookie dough by rounded tablespoons onto prepared baking sheet. Bake for 10 minutes, or until slightly golden around the edges and set. Remove cookies from oven and let cool on baking sheet for two minutes. Transfer to a cooling rack and cool completely.

Melt butter in a medium saucepan over medium-high heat. Cook, gently swirling pan constantly, until particles begin to turn golden brown and butter smells nutty, about 5 minutes. Remove from heat and continue swirling the pan until the butter is a rich brown, about 15 seconds longer. Transfer to a medium bowl, whisk in ice cube, transfer to refrigerator, and allow to cool completely, about 20 minutes, whisking occasionally. (Alternatively, whisk over an ice bath to hasten process).

Meanwhile, whisk together flour, baking soda, and salt in a large bowl. Place granulated sugar, eggs, and vanilla extract in the bowl of a stand mixer fitted with the whisk attachment. Whisk on medium high speed until mixture is pale brownish-yellow and falls off the whisk in thick ribbons when lifted, about 5 minutes.

Fit paddle attachment onto mixer. When brown butter mixture has cooled (it should be just starting to turn opaque again and firm around the edges), Add brown sugar and cooled brown butter to egg mixture in stand mixer. Mix on medium speed to combine, about 15 seconds. Add flour mixture and mix on low speed until just barely combined but some dry flour still remains, about 15 seconds. Add chocolate and mix on low until dough comes together, about 15 seconds longer. Transfer to an airtight container and refrigerate dough at least overnight and up to three days.

When ready to bake, adjust oven racks to upper and lower middle positions and preheat oven to 325 °F. Using a 1-ounce ice cream scoop or a spoon, place scoops of cookie dough onto a non-stick or parchment-lined baking sheet. Each ball should measure approximately 3 tablespoons in volume and you should be able to fit 6 to 8 balls on each sheet. Transfer to oven and bake until golden brown around edges but still soft, 13 to 16 minutes, rotating pans back to front and top and bottom half way through baking.

Remove baking sheets from oven. While cookies are still hot, sprinkle very lightly with coarse salt and gently press it down to embed. Let cool for 2 minutes, then transfer cookies to a wire rack to cool completely.

Repeat steps 3 and 4 for remaining cookie dough. Allow cookies to cool completely before storing in an airtight container, plastic bag, or cookie jar at room temperature for up to 5 days.
Posted by Amélie at 8:15 PM