Did you know that Texas has a second rhubarb crop, in late summer? I wasn’t going to let that go to waste, so I made cupcakes from the blog Call Me Cupcake. The full name of these is sour cream rhubarb cupcakes with ginger cream cheese frosting and poached rhubarb, and you should really go take a look at the gorgeous pictures on the original post! Note that this is one recipe you could make with frozen chopped rhubarb, too, so don’t let the season stop you.

Obviously, I made some modifications so that they would be lactose-free. Even then, I found the method odd – mix the sugar with the flour? Beat in the butter with a fork? The result were the oiliest cupcakes I’ve ever seen, soaking through the paper liners into the tins and giving them an odd texture. That being said, they tasted so good! The ginger was barely discernable in the frosting, but broke the monotony of vegan cream cheese nicely. The cardamom was a lovely addition, and the softened, poached pieces of tart rhubarb contrasted nicely with the sweet frosting. The Engineer also gave them a thumbs up. 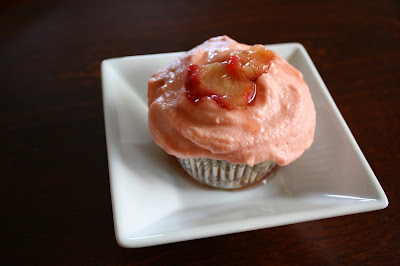 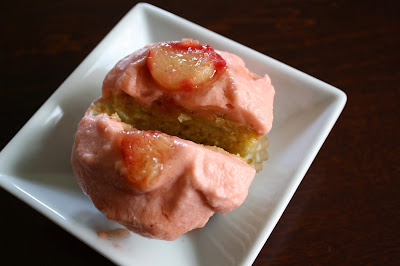 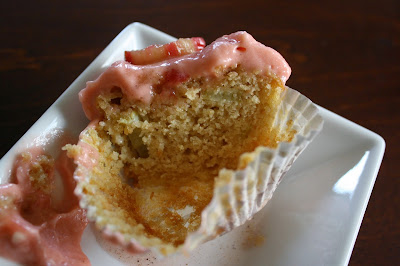 Since I had a little leftover rhubarb, I froze it. I wasn’t sure what I’d use it for, but after I got my piping tips, I used it to make the cupcakes again. This time, I made them with an improvised strawberry-ginger frosting (1 package of Go Veggie strawberry cream cheese substitute, ¼ tsp. ground ginger, 1 cup sifted powdered sugar), figuring that rhubarb and strawberry are a winning combination. The cupcakes were definitely better, so I’m giving you my version below. The Engineer said that I nailed it! 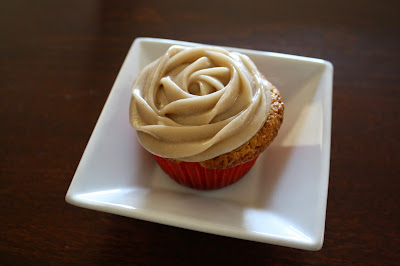 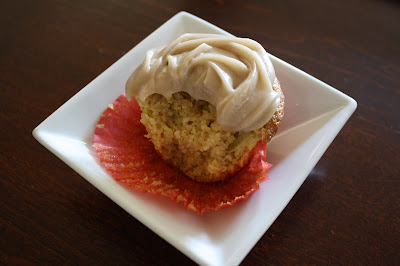 [Note that in both recipes, the cream cheese substitute that I used was Go Veggie brand, and it was sent to me for free by the company. More on that in a later post.]

Preheat oven to 350 °F. Prepare a standard muffin tin with 12 cupcake liners. (The first time I made the recipe, I got 12 cupcakes, but for some reason, the second time, it was only 9, though they were a little plumper.)

Mix flour, baking powder and salt in a medium bowl.

In a large bowl, cream butter with sugar. Add eggs and vanilla and beat until smooth.

Divide batter amongst the cupcake liners and bake for 20-23 minutes. Check doneness with a toothpick before removing from the oven. Let cool.


For the poached rhubarb with cardamom
100 g. rhubarb, trimmed and finely chopped (about ¾ cup)
1/3 cup + 1 ½ Tbsp. water
3 Tbsp. granulated sugar
¼ – ½ tsp freshly ground cardamom (to taste, can be omitted or replaced with vanilla)

Put rhubarb, water, sugar and cardamom in a saucepan. Let simmer very gently for about 5 minutes or until rhubarb is soft (not mushy!).

Put a strainer on top of a bowl. Pour mixture into strainer and put the rhubarb pieces in another bowl to cool. Pour the liquid back into the saucepan and let simmer until slightly thickened, about 5-10 minutes. Pour into a bowl to let cool. Mix together rhubarb and liquid.

Beat butter until pale. Add powdered sugar and beat until smooth and pale, about 1 minute.

Add cream cheese, ginger and food coloring and beat until smooth. Refrigerate if necessary to get a thicker consistency. (You could add more sugar, but I only used 1 cup and the Engineer found it a little too sweet for his liking already.)


For assembling
Fill a piping bag, fitted with a large round piping tip, with frosting.

Pipe “blobs” on top of each cupcake. Use an offset spatula or a spoon to create a swirl or a well in each blob. Spoon poached rhubarb on top and serve.